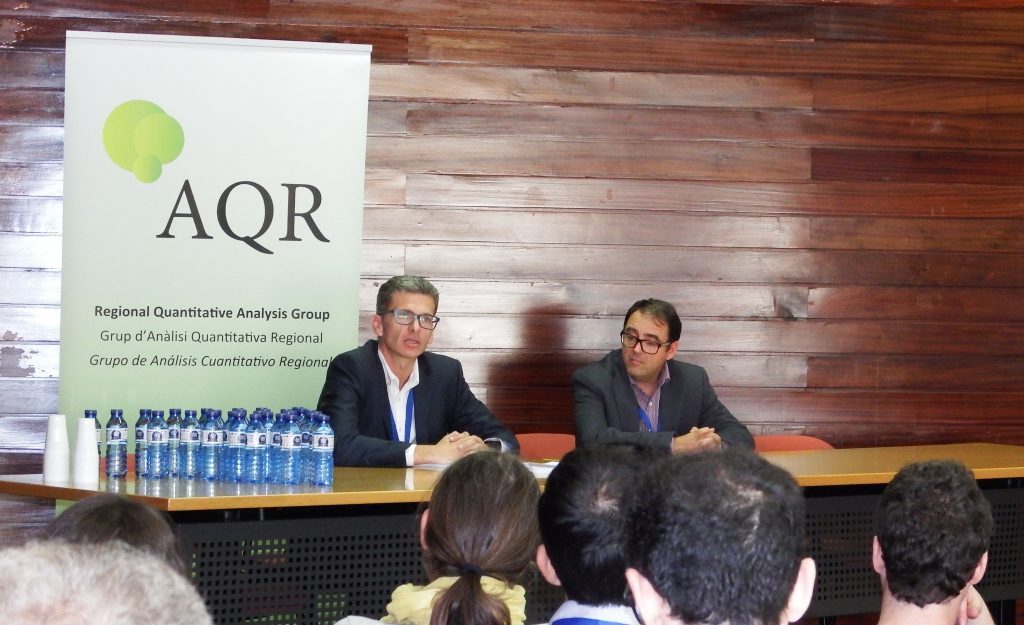 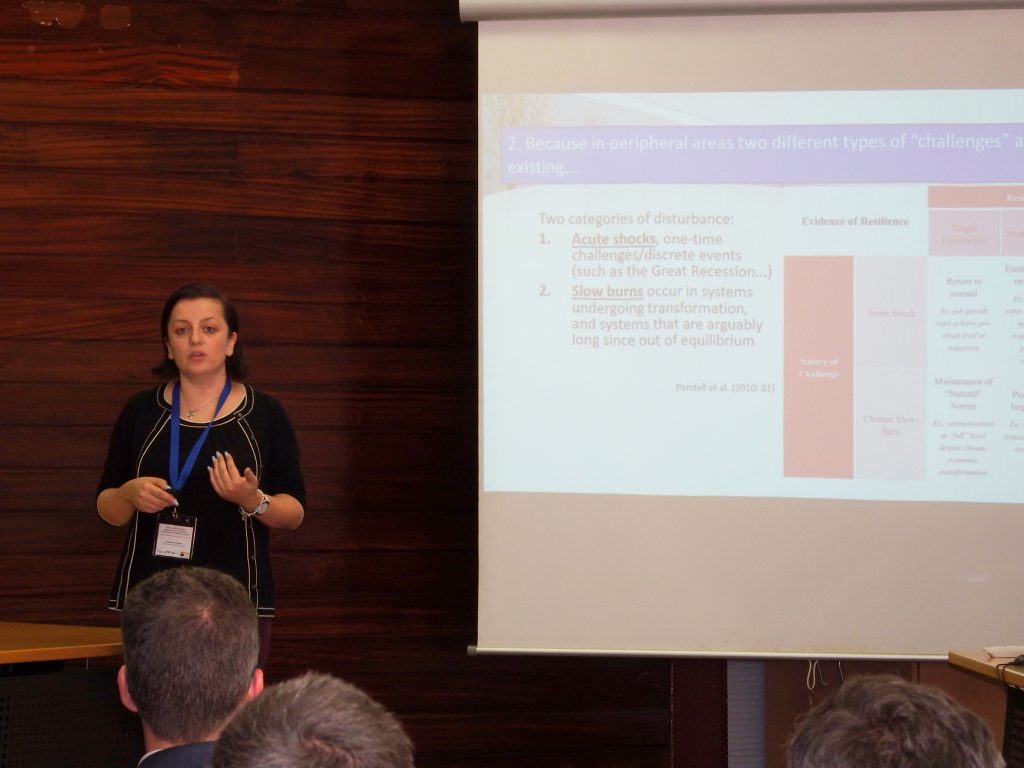 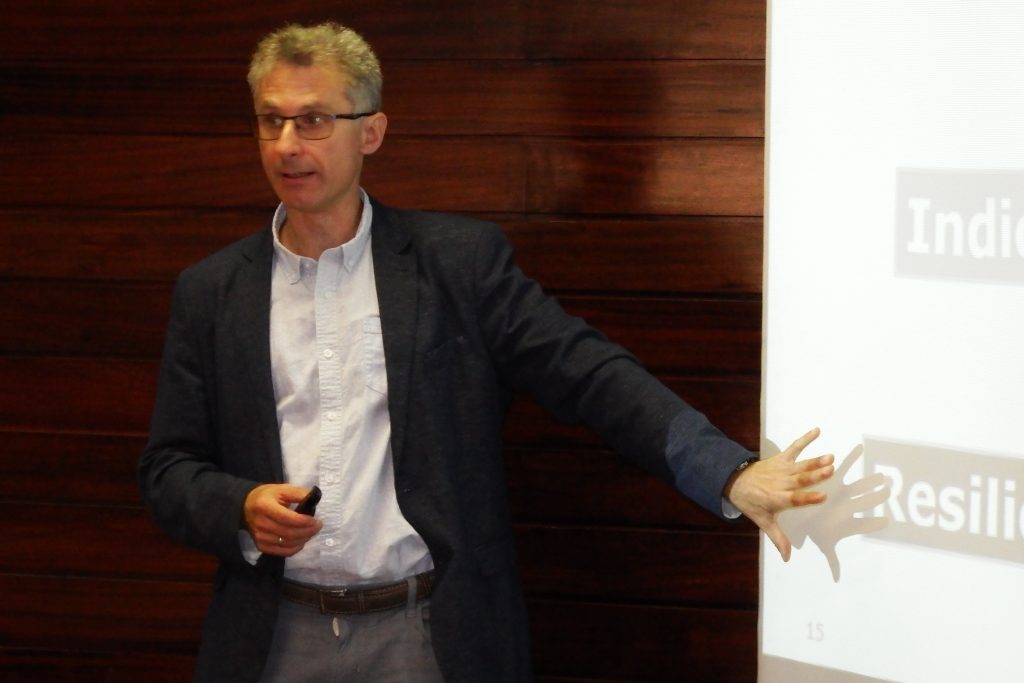 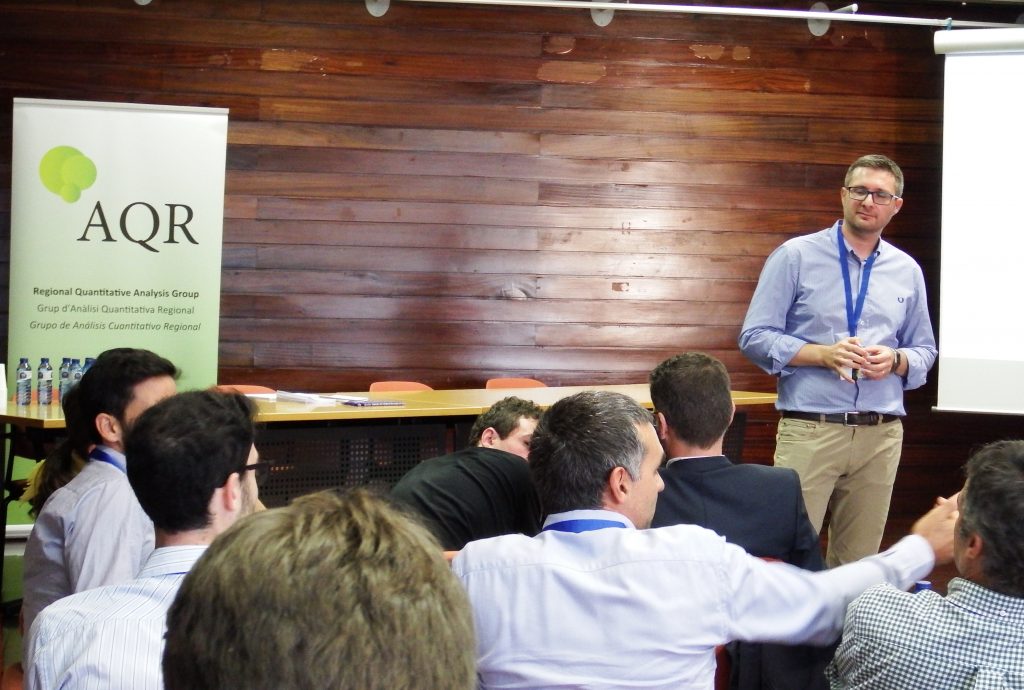 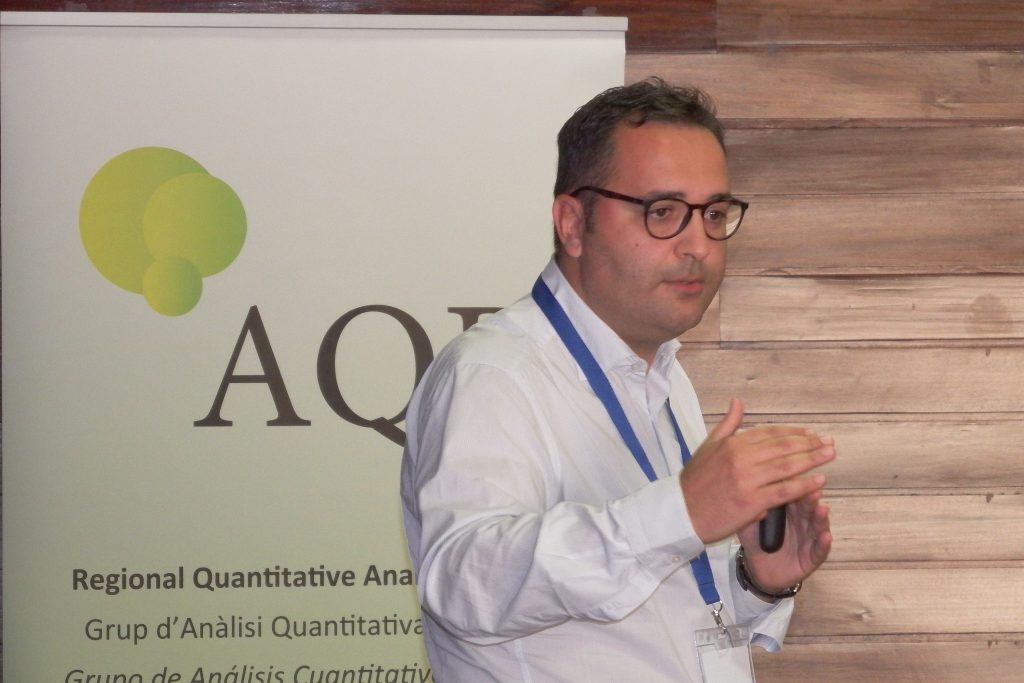 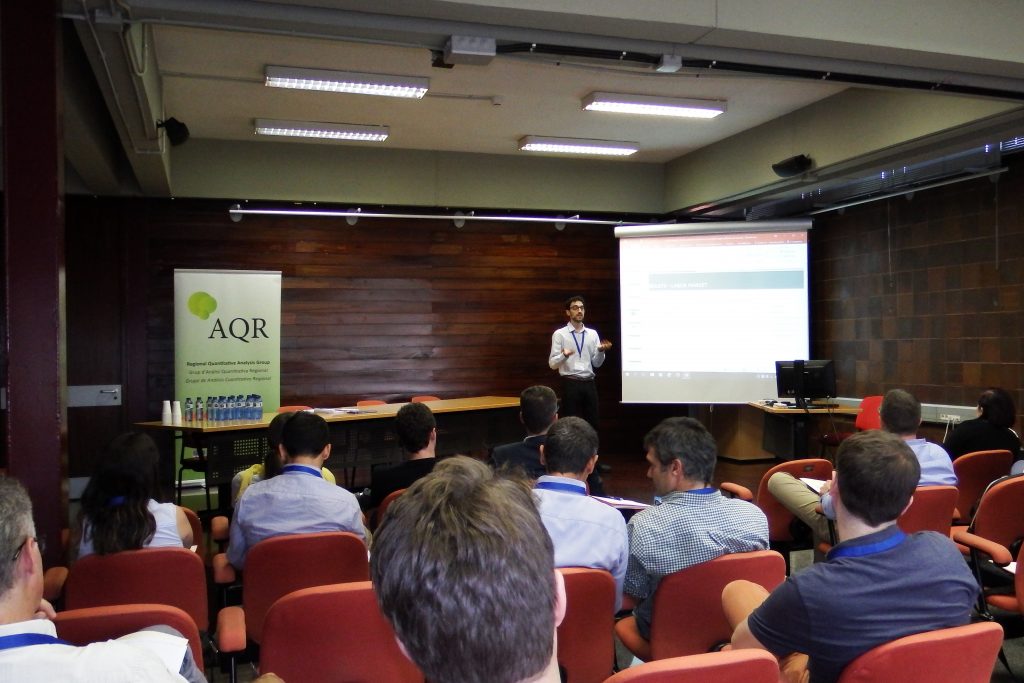 On October 4th and 5th 2018, AQR-IREA hosted the ERSA – 2018 Barcelona Workshop on “Territorial resilience: mitigation and adaptation” at the Faculty of Economics and Business of the University of Barcelona.

As in past editions, the 2018 Barcelona Workshop on Regional and Urban Economics organised by the AQR research group in collaboration with the ERSA, brought together researchers interested in spatial economics, as well as in other interrelated disciplines such as development and conflict, housing economics, labour markets, or innovation. This year the Workshop focused on the topic of Territorial resilience, with the aim of bringing together cutting-edge research papers around two complementary and interrelated axis: Processes of mitigation (Resistance-Recovery), and Adaptive resilience (Re-orientation-Renewal).

The Scientific Committee received close to 20 works linked with the topic of regional resilience. The final program included five papers and two keynote speakers’ presentations: Alessandra Faggian (Professor of Applied Economics, Director of Social Sciences and Vice Provost for Research at the Gran Sasso Science Institute in L’Aquila, Italy), and Péter Benczúr (Scientific Officer at the European Commission’s Joint Research Center in Ispra, Italy). Some 50 scholars and researchers registered and attended the thematic sessions and the keynote speeches, contributing to the dynamic debates during the presentation of the papers and also during the coffee breaks and the Workshop lunch.

On October the 4th, the opening ceremony included speeches of Dr. Raul Ramos Vice-Dean of the Faculty of Economics and Business of the University of Barcelona, welcomed all presenters and the audience, and Dr. Vicente Royuela, member of the Organising Committee, introduced the workshop and acknowledged the work done by the members of the Organising and Scientific Committees. Just after the short protocolary ceremony, Dr. Alessandra Faggian showed in her speech the identification of different dimensions of resilience in Italian territories, including both travel to work areas and municipalities, in an exhaustive and impressive dissection of the spatial impact of the Great Recession.

The first contributed session was entitled “Economic Resilience to Natural Disasters”. It included two papers. Rafaele Scuderi, Giuseppe Tesoriere and Vincenzo Fasone (Kore University of Enna) presented the work titled “Adaptation of micro-enterprises to floods: evidence from Ugandan cities”. They analyze the impact of floods on the development of micro-enterprises in Uganda. In particular, they offer empirical evidence on the association between both phenomena based on the analysis of microdata from a survey conducted in 13 cities and towns where floods occur regularly. Their results show that the negative impact on companies is lower in those areas with the greatest impact of floods precisely because they adopt adaptation strategies where collaborative networks between companies are a key factor.

Peleg Samuels (Hebrew University of Jerusalem) presented a work, coauthored with A. Yair Grinberger, titled “Labor Mobility, Trade and Urban Resilience to Natural Disasters”. They focus on the effects of natural disasters on the labor market from simulation models, finding that worker mobility is one of the main mechanisms through which the negative effects of shocks are absorbed.

On October the 5th, we enjoyed the second keynote speech. Péter Benczúr presented the work that the Joint Research Center is developing on the topic of Resilience. First of all, he showed a methodological introduction reporting what is the main idea behind the concept of Resilience, and showing not only the past based definition of the concept (the situation of the region before a shock takes place) but also the forward idea behind it: if the region reaches a sustainable path of development. The inputs and the mechanisms of the social and economic engines of the regions are the basis for a multidimensional concept of resilience. He also showed the measurement strategy, and its implementation both at the national and at the regional level in Europe.

Later, we had the second contributed session entitled “Resilience and Public Policies”.  Nicola Pontarollo (Joint Research Center, European Commission) presented the work titled “Towards regional renewal: A multilevel perspective for EU”, coauthored by Carolina Serpieri (Sapienza Università di Rome). They analyze the renewal capacity of the regions after the 2008 crisis by identifying the variables that determine this capacity. One of the main results of the work is that there is a need for coordination between the different levels of government so that regional renewal strategies have the desired success.

Finally, Vicente Ríos Ezcurra (Public University of Navarra) presented the paper “Quality of government and regional resilience in the European Union. Evidence from the Great Recession” coauthored with Roberto Ezcurra (Public University of Navarra). They analyze an additional aspect in the possible determinants of regional resilience: the quality of government. In particular, his analysis confirms the relevance of this aspect not only on the analyzed region but also on the neighboring ones.

In our view, these works offered a broad view on the subject that should help to identify more clearly the determinants of regional resilience and allow, therefore, to discuss what would be the necessary reforms to improve the capacity of the regions to deal with disturbances negative in the near future. Different publishing options have also arisen during the development of the workshop and we hopefully expect to announce in brief the launch of a call for papers of a special issue in an indexed journal that would allow gathering together the main results of the presented papers and cutting-edge research on the analysed topic.

The 2018 Barcelona Workshop on Regional and Urban Economics is the ninth edition of an annual scientific meeting devoted to the regional and urban economy and developed by the AQR-IREA research group of the University of Barcelona. To know more about other editions of the workshop, you can consult the history in this link. 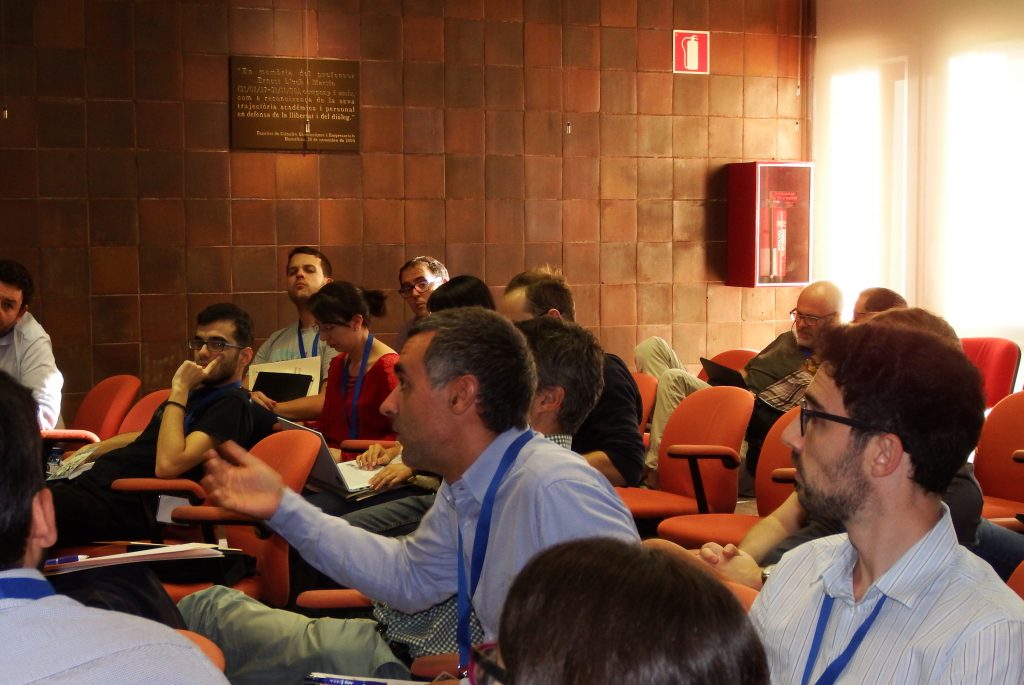 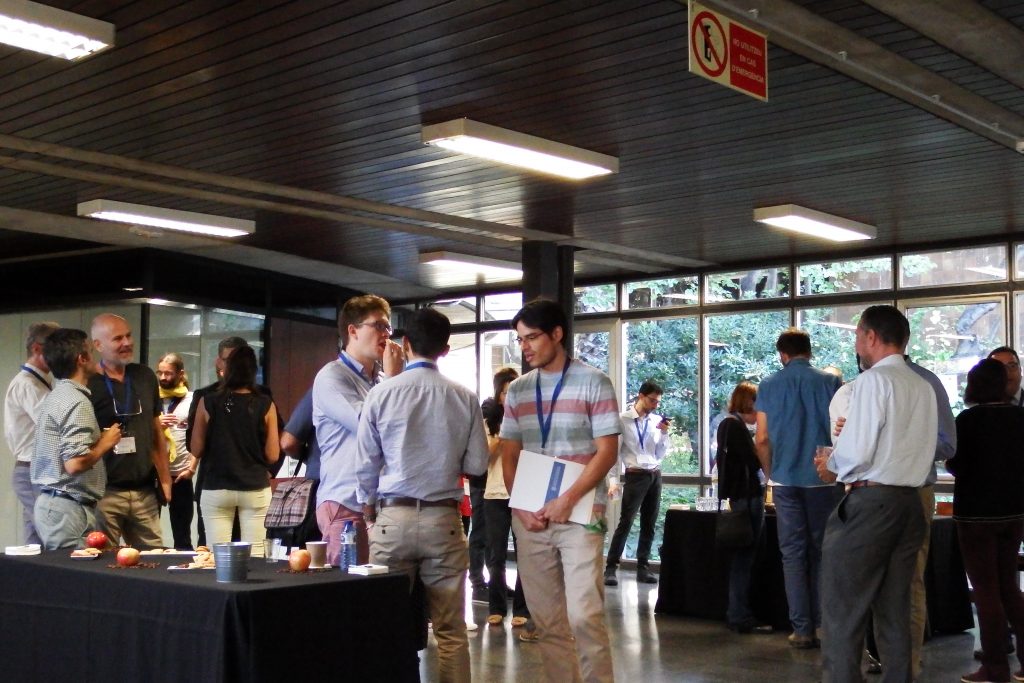