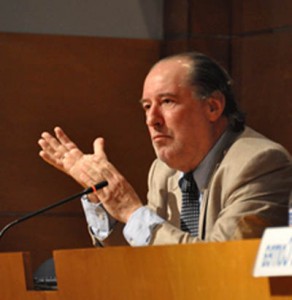 , member of the Universitat de Barcelona Business School, has been awarded the European Medal for Merit in Work by the European Association of Economy and Competitiveness in recognition of his professional career as an economist and his participation in various media. He has also been distinguished as Honorary Counselor of the organisation. Gay de Liébana, doctor in Economics and Law, usually comments economic current affairs in several TV and radio programmes, he also writes articles in newspapers, magazines and journals.

The European Association of Economy and Competitiveness was created to promote, develop and recognise the mechanisms of companies that promote good business development within the European framework. It identifies the actions and measures undertaken by firms, and raises awareness about the role played by companies that encourage and inspire potential entrepreneurs.