Covid-19 Survey. Preliminary results 3: Most likely scenarios and actions for a better future

In this third Preview of results we compare the responses received until April 27, 2020 in the three questionnaires that we have launched (in Spanish, Italian and English), to the questions about the most probable future scenario and the actions that citizens who have answered will carry out in order for the future to be better or not worse.

The multiple answer question about what they are going to do to make the future better or not worse brings us closer to the measure and potential of action of society. In this case, the vast majority of people affirm that they will act for a better future, and only a very small minority (4 to 5%) affirm that they cannot do anything. There are three major goals / objectives associated with a better future which in order of importance are: family and loved ones, the environment and the well-being of others.

The actions that stand out the most are, in order, being closer to loved ones followed by caring for the environment, in this case only in the questionnaires in English and Spanish. In the English questionnaire, helping others is the third action to achieve a better future, while in the other two questionnaires, the third action is to change consumption patterns. In descending order, with interesting differences, we have the actions of changing lifestyles, participating in social organizations and being less selfish.

At the bottom of the graph, that is, actions that will be done the least, are, along with people who say they cannot do anything for the future (between 4% and 5%), those who will vote for another party (between 4 and 9%). The possibility of being directly involved in political life is very low in the questionnaires in Spanish and Italian (8 and 11%), but it is substantially higher in the answers in the questionnaire in English (27%). 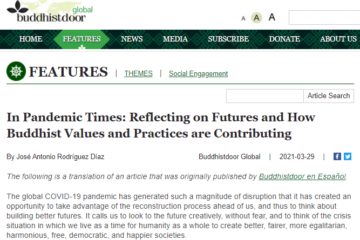 "In Pandemic Times: Reflecting on Futures and How Buddhist Values and Practices are Contributing" (Link to post on Buddhistdoor.net).

We just published the following article on Buddhistdoor: 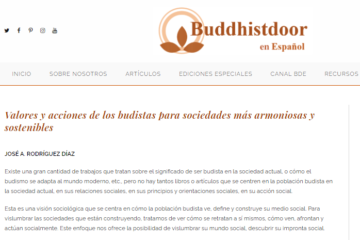