The proposal of a new regional teleconnection pattern, the Western Mediterranean Oscillation (WeMO), is only defined within the synoptic framework of the western Mediterranean basin and its vicinities. The suggested areas are the Po plain, in the north of the Italian peninsula, an area with a relatively high barometric variability due to the different influence of the central European anticyclone and the Liguria low; and the gulf of Cádiz, in the southwest of the Iberian peninsula, often subject to the influence of the Azores anticyclone and, episodically, to the cut off of circumpolar lows or to its own cyclogenesis. The transect linking both areas matches more or less to the coastline of the basin’s northwestern quadrant, that is to say, a large part of the eastern façade of the Iberian peninsula. The main reason of its definition is due to the poor relationship between the eastern Iberian façade rainfall and the North Atlantic Oscillation (NAO). Following the classical methods used to create other variable low-frequency pattern indexes, it was decided to use only two specific observation points, one for each dipole area, with some of the longest barometric series in Europe, Padua (45º24’N-11º52’E) in the north of Italy and San Fernando (Cádiz) (36º28’N-6º12’W) in the southwest of Spain. San Fernando site belongs to the AEMET network and is currently run by the Royal Observatory of the Spanish Navy. Both barometric series with a daily resolution were collected within the framework of the European project IMPROVE (Camuffo and Jones, 2002). The series cover jointly and continously the 1821-2019 period.

Thus, identifying the basic atmospheric circulations are detected on the SW-NE orientation of the segment. In addition, the definition of de WeMO and its corresponding index (WeMOi), the surface level has benn chosen because, for purposes of application to the catalan countries rainfall, surface flow management is a key factor in the case torrential rainfall (Estrela et al., 2002; Azorín-Molina and Lopez-Bustins, 2004). 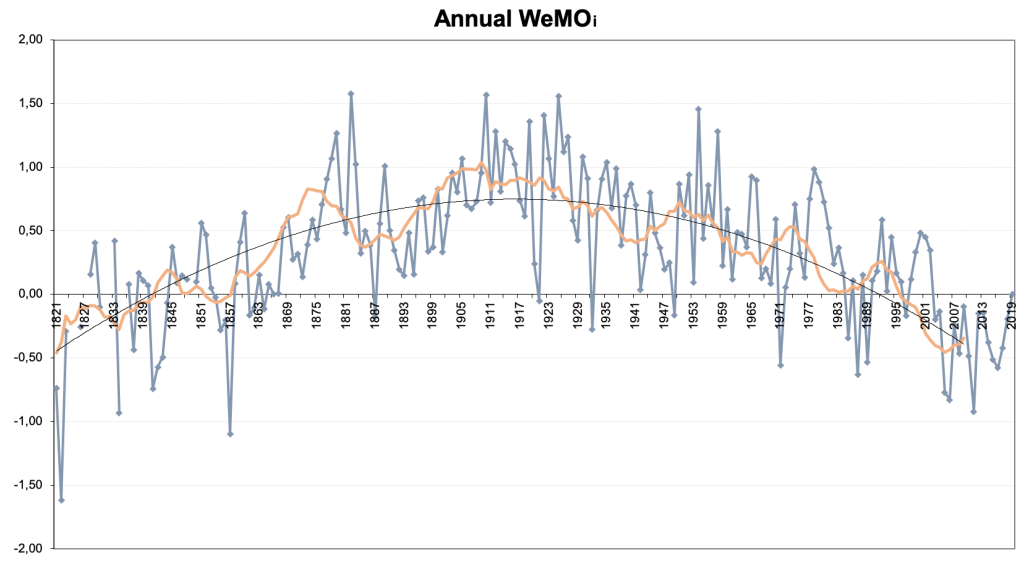 The WeMOi research has focused on the prediction of it in order to configure itself as a predictive tool for torrential rains associated, especially during the autumn months. The calculation of this index is made using the surface pressure data of the GFS model and is updated with the model outputs at 00h and 12h and up to 144h.

You can see the images of the WeMOTool tool for different important episodes from 2018, 48 hours before its start.

Here you can download this data with Excel and TXT.