Moments from Greece pre- and after the elections /1

Things in Athens are really interesting these last days before the elections. There is an open “war” against Syriza from all the other parties, emphasizing mainly on “fear”: they are presenting the possible election of Syriza as the worst thing that can happen to the country, salaries and pensions won’t be paid, the public sector won’t function and there will be a GREXIT from Eurozone. In the same mood many officials from conservative governments and institutions in Europe make similar declarations. today the European Central Bank is probably going to exclude Greek bonds from the quantitative easing program, just three days before the elections, as a way also to make people feel uncertain about the future of the economy. (The articles of the newspaper Kathimerini depict this line of thinking).

On the other hand, though, people don’t seem to be so afraid anymore. It is like the words “Syriza” and “Tsipras” are echoing above the city: in squares, cafes, buses, streets the political discussion is very tense. People seem not to expect many things from a Left government but still seem to be quite sure that Syriza will try for the best or they are so angry with the previous governments that they will vote for Syriza to “punish ND and PASOK”. At the same time there is a wide support and solidarity from all over the world to Syriza: known politicians, academics, journalists, artists but also unions and collectives are writing texts and signing petitions to support Syriza while people from all over the world are coming to Athens for the day of the elections. (for more Greek Independent News , The Press Project). 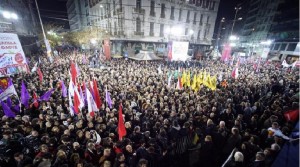