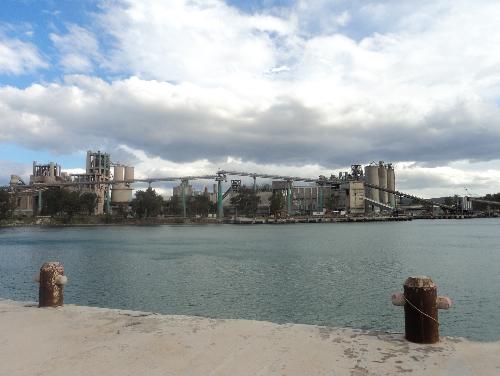 Chalkida, is the capital of the island of Evia. Industrial activity in its surrounding areas has developed into an extended small and medium enterprise structure. Its rich natural resources and its geographic location (it is located only 78 kilometers away from Athens) have also been a major asset. The large migration flows from Asia Minor in the 1920s were crucial to its urban development. People who settled in the area were mostly occupied in the growing industries (heavy and chemical industries, food processing, manufacturing, textile, furniture) while others opened small businesses to service the growing economy of the city. During 1960s and 1970s a population boom followed the sprawl of several industrial units in Avlida and Inofyta, which took advantage of the geographic location and the transportation infrastructures of Chalkida.  In 1993 the new Euripous Bridge was built connecting Chalkida directly with Tanagra-Inofyta-Schimatari shaping the city as the centre of the largest industrial district in Greece.

Nowadays, crisis has disrupted Chalkida’s social web and has had severe effects on the local economy, mainly because of the acute decline of industrial production which was the driving force of local economy. Many industries have either closed down or proceeded to job and wage cuts. On the one hand, a relatively big percentage of industrial workers whose wages activated the local market of Chalkida have lost their income. On the other hand, the employed population has learned to live with insecurity, uncertainty and fear and has had to adjust to a significantly reduced income. A working population that enjoyed a relative stability has suffered from major shock both at the material and ideological level. This has resulted in a re-evaluation of their life projects and future expectations.

My PhD thesis research project “Authoritative Economic Models, Everyday Struggles and Grassroots Responses to the Crisis in a Greek County Town: The Case of Chalkida”  will investigate the way people design life projects and grasp the grassroots meanings of peoples’ understanding of the economic processes that affect them.