Piraeus is a city in close proximity to Athens and the biggest port of Greece (pic.1). According to the 2011 census, the municipality of Piraeus had a population of 163,688 people while the wider Piraeus area more than 400,000. Piraeus, during the years, has been one of the most important marine, industrial and commercial centers of Greece.

The municipality of Piraeus was established in 1835 a few years after the proclamation of Athens as the capital of Greece (pic. 2). According to estimates at this period Piraeus had 300 residents. During the 19th century though, its proximity to the capital and its strategic geographic position attracted migrants mainly from the Aegean islands but also from other parts of the country. These years Piraeus became one of the most important industrial centers of Greece, called the “Greek Manchester” with more than 50 factories in different areas of production that employed thousands of workers. One of the biggest of those factories was producing fertilizers in Drapetsona and in 1935 employed more than 4,000 workers, while today the building is abandoned (pic. 3). In the end of 19th century the population of the city was more than 50,000 people. However the major demographic change occurred with the arrival of refugees from Asia Minor when the population of the wider Piraeus area reached 250,000 people in 1928. Refugees mainly inhabited the suburbs of the city, in neighborhoods like Nikaia, Keratsini and Drapetsona that are still today the most poor and working class parts of the wider Piraeus area.

During World War II, the largest part of the city was damaged —according to estimates the 75% of its buildings were destroyed— while many of its residents moved to Athens (pic. 4). Some of the most important battles of the Greek civil war took place in these years in the wider Piraeus area. After the wars, the city slowly regained its dynamism as it became the most important shipping center of the country while part of its industry oriented to shipyards. Especially during the years of the military junta (1967-1974) ship-owners were given important incentives to bring their companies to Piraeus. A. Skylitsis, the mayor of the city during junta, also “cleaned” the city from its “shady” neighborhoods of prostitution and petty crime (see the famous film by Jules Dassin Never on Sunday, pic. 5) while he also brought down the majority of the abandoned neoclassical buildings that used to be landmarks of the city (like the clock tower functioning as a stock exchange of products, pic. 6).

During the next decades more and more blocks of flats were built in the city which got its present-day form (pic. 7). However still today one can see the small self-made houses of the refugees among very modern houses (pics. 8, 9).

Today the port of Piraeus is one of the biggest ports of Europe. As a passengers port it serves more than 20 million people per year —almost twice the population of the country— as it is the main connection to the Greek islands. Piraeus Port Authority (ΟΛΠ) is the state company that administers the port and one of the biggest employers in Piraeus with more than a thousand workers. On the other side of the port, two of the three commercial terminals are, since 2009, contracted to COSCO Pacific Limited (pic.10). Although the container traffic has tripled with the COSCO investment, most of the containers are transshipped from Piraeus to other ports and, according to local people, the increase in container traffic has not benefited the local economy.

During the recent crisis the few industrial units as well as the shipyards —that employed thousands of workers— have actually stopped functioning and unemployment in the wider Piraeus area has risen dramatically. In Perama, where most of the shipyards were operating, unemployment has risen to 60% according to official statistics.

The research in Piraeus will focus on the everyday economic practices of the people. It will also address how the recent political transformations that have occurred in Greece are translated into everyday life conditions of possibility for people in the city.

Piraeus, as the main port connecting the mainland to the islands of the Aegean, has been one of the “hubs” of the massive migration movements that cross Greece since the summer of 2015. 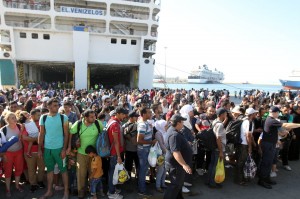 People from Syria, Afghanistan, Iraq and elsewhere arrive every day in the islands and cross from Piraeus in order to arrive to Athens and then try to continue their journey towards the Northern Greek borders on the road to Western Europe. 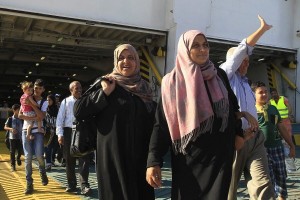 This movement in Piraeus was transit for several months as most of the people would arrive from the islands and leave within hours. The closing of the borders on the Balkan route, however, meant that thousands of migrants and refugees are trapped in Greece. Some of them, as they have nowhere else to go, just remained in the port of Piraeus. During this week it was almost 3.500 people living in the port.

OLP, the port authority, is providing some buildings for the settlement however these are not enough: self made tents, cartoon boxes and trucks are composing a self-organized temporary settlement. 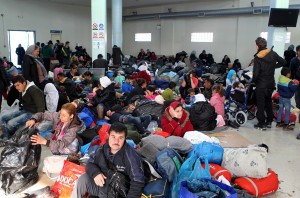 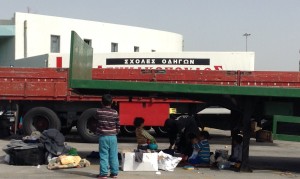 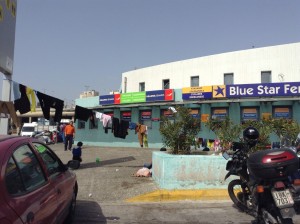 People in Piraeus are providing for the refugees. Hundreds of people volunteer every day to transform the port into a welcoming place for the migrants and refugees that are there. 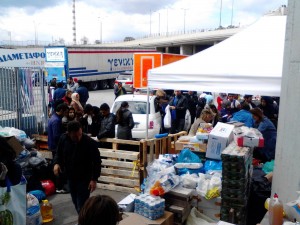 They bring water, food, items of personal hygiene, clothes, shoes, blankets, tents, and they also organize the distribution, the cleaning, the access to medical care and support. 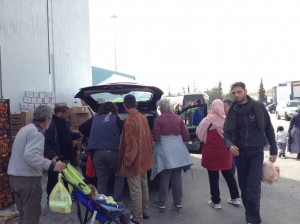 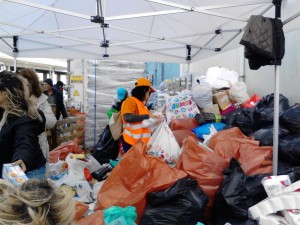 The self-made warehouses where the items offered are stocked are full. 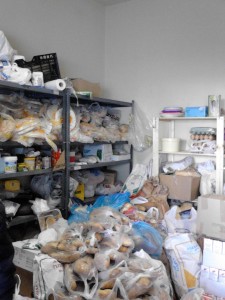 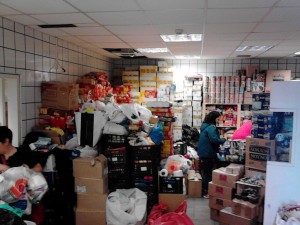 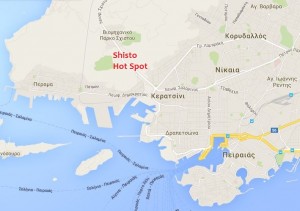 In Shisto, a few kilometers from the harbor of Piraeus, a Hot Spot started functioning in the end of February. The Hot Spots are part of the plan of the government in order to manage migration. They are mainly temporary structures for the refugees to settle and are mainly in the responsibility of the army.

While the Shisto camp was still under construction a mobilization was set up against it. Mainly people from the Golden Dawn party, signing as “Citizens of Piraeus”, launched a big campaign throughout the city against the construction of the Hot Spot. The days before the 8th of February –when the mobilization took place- the streets of the city were full of leaflets with the slogan “NO CENTER OF ILLEGAL MIGRANTS IN SHISTO” while the basic points translated here were:

Furthermore in Perama -as it is the neighborhood closer to Shisto- they were also collecting signatures door to door. Around 200 people participated in the mobilization against Shisto and many of the MP’s of the Golden Dawn Party. 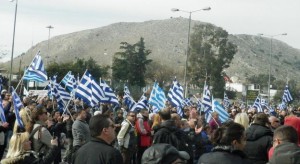 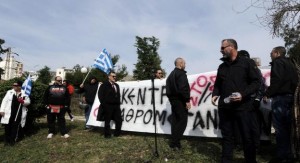 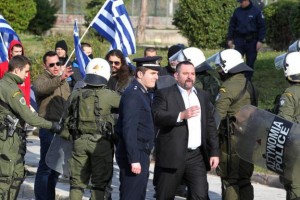 In parallel there was another gathering, just a few meters away, by antiracist and antifascist collectives opposing Golden Dawn with main slogan “KICK OUT THE FASCISTS FROM OUR NEIGHBOORHOODS”. 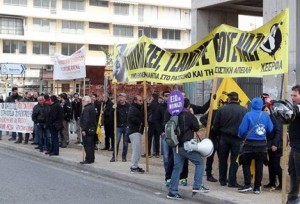 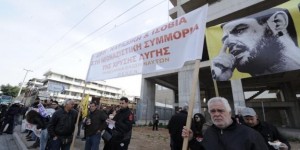 In between the two gatherings strong police forces were preventing the clash. 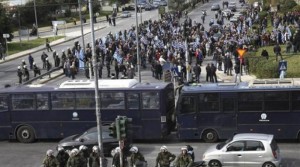 On the 22nd of February, a few days before the opening of the camp, probably the same fascist groups that organized the demonstration against Shisto, hanged a cross and the head of a pig on the wires around the camp. They wanted to suggest that this is an unwelcoming place for Muslims. 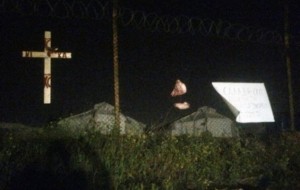 I visited Shisto three times since it started functioning. In an old and abandoned army camp more than 2.000 people reside today. They are mainly Afghans, who are not longer considered “refugees” and cannot cross the borders through the Balkan route. 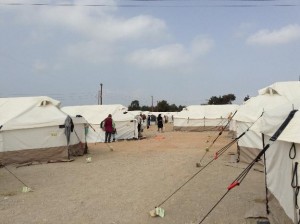 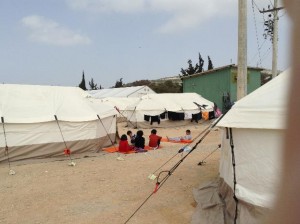 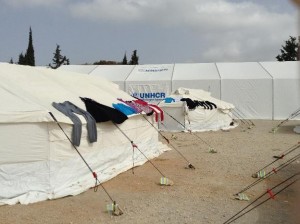 They are free to exit the camp with a white paper they are given while also local groups and NGO’s can enter more or less freely the camp. Around 2.000 people are settled in Shisto now. The infrastructure is provided by the army and by some NGO’s or international institutions like UNHCR. 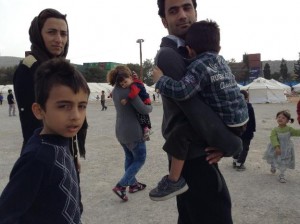 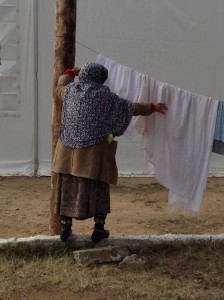 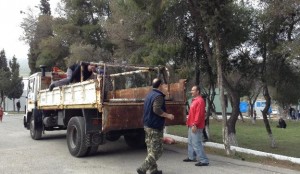 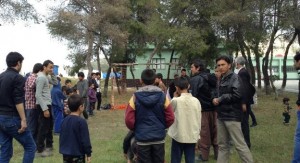 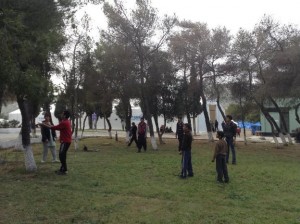 Around the Shisto camp small economic activities just popped up. Taxi drivers queue in the entrance in order to transfer people who want to go out and employees from mobile telephone companies are always around the camp to sell sim cards to the migrants. At the same time, a canteen that used to be open only on Sundays when an open air market is taking place in Shisto, started functioning daily. A couple from Perama together with their 30 years old son are running the family “business”. They added chicken meat –as Muslims don’t eat pork- and falafel to their menu while they also translated the catalogue to Farsi. 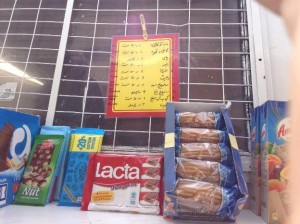 Today people in Perama are ambivalent about Shisto camp. Many of the residents are in solidarity to the refugees and are trying to support them. On Saturday the Solidarity Assembly of Perama made a stand in the central square of the town to collect stuff for the refugees and hundreds of people came to support and bring things. At the same time other people say they are afraid and worried. In the upper Perama residents even made “night guards” to secure their houses: “They come around here, in the night, we hear the dogs barking, we go out. They haven’t done anything yet, but we have to be careful”. And he adds “Because we have our children, that’s why we are afraid”.