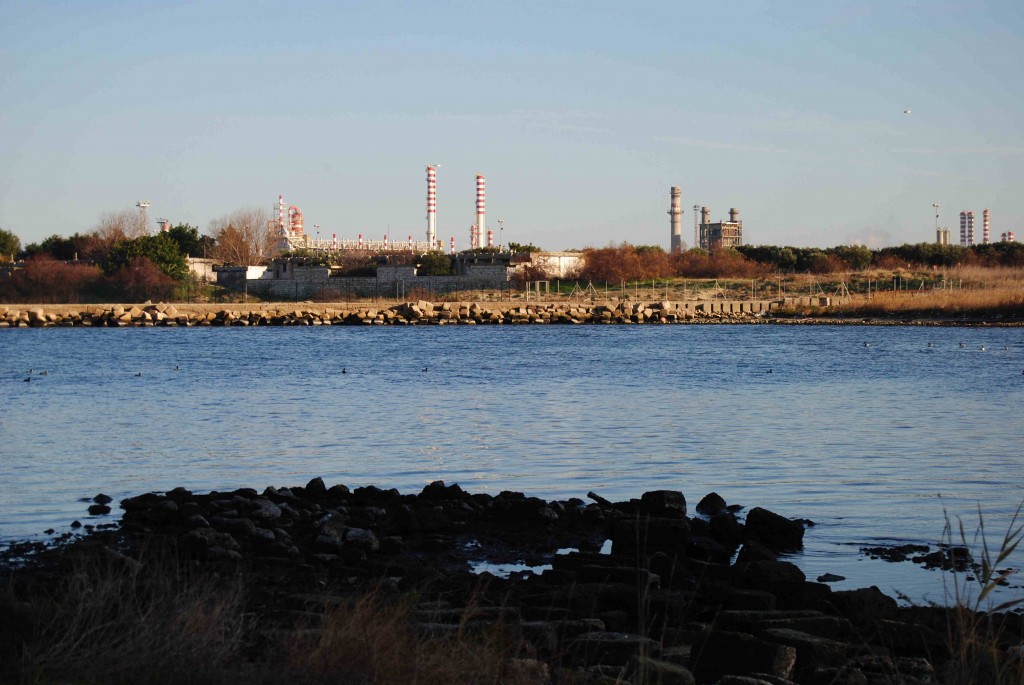 Brindisi, 88,000 inhabitants, is a port and industrial city along the southern Adriatic coastline. Although located in a predominantly rural area, since the late 19th century the urban and economic environment of the city has been characterized by the presence of artisan and small labour intensive industries, linked to maritime commerce, the presence of the Italian Navy and, later, the aeronautics. Industrial take-off, however, occurred in the 1960s with the creation of a large petrochemical plant, funded by the state agency for the development of the South. The “growth pole” crisis was followed, in the 1980s, by a further large-scale investment in the construction of a large coal-fired power station. The trajectory of these capital intensive industrial poles – expansion, crisis, decline, downsizing, restructuring, etc. – have significantly shaped the social, economic and environmental history of the region.

The research project investigates people’s conceptual frameworks, meaning and practice of livelihoods in connection with broader transformations in the political economy of labour, welfare and state-driven economic development. Focusing on the articulation between political and moral economy, the research explores the links between strategies of social reproduction, common sense and economic models.

Unemployment in Brindisi: From Welfare to Workfare – Lavori Socialmente Utili

Lavori Socialmente Utili (socially useful works; LSU from now on) is a social welfare scheme that endowed public administrations with special funds to subsidize unemployed people for local community work. According to official sources (INPS – the national social security institute), by 2015 around 15.000 LSU workers were still in service, mostly concentrated in the public administrations of southern regions. Their number had increased rapidly throughout the 1990s, reaching the peak figure of almost 170.000 at the end of the decade. The first LSU program in Brindisi was initiated in 1995 and the last one in 2001. Initially, a large share of workers made redundant by the end of the construction works of the ENEL power station applied to the program. At the same time, there was a relevant share of unemployed women.
The national government has established that LSU workers subsidies have to be extinguished within the end of 2016. This means that the public administrations where they are in service are requested to present a worker stabilization plan, according to available resources. The Brindisi town hall executive director elaborated a triennial plan that should turn the remaining 81 LSU workers into actual permanent employees. The mayoral elections of June 2016 raised many expectations that a new government could have finally taken charge of the issue. However, the newly elected municipal government approved a new biennial stabilization plan for only 22 workers

The regional scheme CDC is designed for long-term unemployed people (at least 12 months), whose ISEE (Indicatore della Situazione Economica Equivalente), an index calculated on the basis of the previous year’s household income and patrimony, is under 3.000 Euros per year. Applicants are selected for “apprenticeship” in one of the projects presented by public institutions and private firms (from service to construction works), for which they would receive a reimbursement of 500 Euros (without further benefits). The apprenticeship lasts 6 months (from July to December), with 20 hours work per week. An initial possibility of a further 6 months extension vanished after the CdC program was absorbed by a new regional workfare program, Reddito di Dignità (Dignity Income).

According to the applications submitted through the union, a relevant number of applicants had been unemployed for much longer than one year. Many of them had been making a living in the “informal” economy (construction sector, agriculture, services). The prevalence among the applicants of people in their fifties –that is, people who often cannot make a living through the informal economy either—is also significant. The prevalence of making a living through the informal economy also accounts for the lower number of applications to the program Reddito minimo garantito (Guaranteed Minimum Income), designed for workers in redundancy payment scheme, who may be able to earn more through the informal economy (rounding up the redundancy package income) than by joining the program.

The area of Brindisi and San Vito dei Normanni (a nearby town) received 398 applications. Only 93 were accepted as valid, but the real recipients were only 36 (in accordance to the available funds). These 36 recipients were assigned to one of the four existing projects after an interview with the municipal social service. According to the responsible social service, due to a lack of proper communication, no private entities (firms, cooperatives etc.) applied as hosts of the CdC in Brindisi. As a result, all the projects were designed and presented by the municipal social services. The projects where the “apprenticeships” of the CdC will take place are: (1) Public administration (Archive digitalization), 7 recipients; (2) Urban green maintenance, 10 recipients; (3) Network of social inclusion (A.D.I. Coop. Genesi, Elder care assistance program), 6 recipients; (4) Preservation and fruition of environmental heritage, 12 recipients.

The Caritas Soup Kitchen (Mensa Caritas) opened in 1995 with a relatively low number (less than 50) of regular recipients, mostly locals. Nowadays the soup kitchen serves around 300 daily meals, divided between some 170 “external” meals (take away meals) and 130 “internal” meals (people who consume the meal in the soup kitchen hall). “External” meals are consumed mostly by “locals”, while “internal” meals are consumed mostly by foreigners, many of them day laborers in the surrounding countryside (a large group comes from countries in central west Africa). 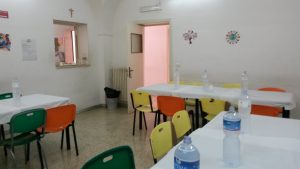 Besides ordinary (but regular) volunteers, the services provided by Caritas are run by 10 or 12 permanent “volunteers” selected among young people (18-28 years old) who apply to the National Civil Service (SCN), and receive a monthly stipend of 433 Euros during their one year service. For unemployed youngsters, this is very often one of the few options to get a cash-income.

Every week-end a parish church Caritas is entirely in charge for the service (providing the food, preparing and serving the meal). Each parish church Caritas has its own turn in a shift of about every 45 days. Parish churches have also their own food banks, that serve exclusively (or are supposed to do so) their own neighborhood. Staple food comes from state-aid provisions and distribution has to be carefully documented (recipients are generally entitled only if they provide their ISEE). Staple food (and clothing a well) is also collected through donations throughout the parish and is not subject to any formal kind of record. These are the two main circuits that regulate food distribution, one “formalized” through “bureaucratic procedures” (about which volunteers complain) and the other entirely managed and organized through volunteers’ practices and following self-developed rules. In the last few years parish churches are also endowed with a meager sum of money they receive from an “anti-crisis fund” (established by the Conferenza Episcopale Italiana). The sum of money they receive, according to the “needs” of each parish church Caritas, is used to cover recipients’ expenses (e.g. bills) that have to be properly motivated.