Urban bees are indicators of quality of the city where we live. In this sense, the project aims to capture and decrypt the information provided by the bees through open source sensors installed outside and inside urban beehives. The sensors provide data such as temperature (internal and external), ambient noise (inside), the weight of the hive or the entrance and exit of the bees, that can be related to the health of the urban ecosystem that surrounds us. 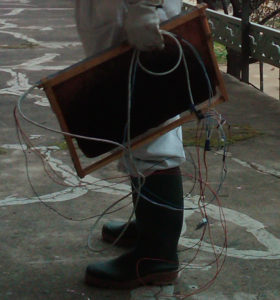 The urban bee project includes the participation of environmental scientists (bees and the environment), physicists of science of complexity (data analysis), technologists (web and electronics) and artists capable of working in this environment.

In December 2012, a multidisciplinary team of 30 people, scientists, beekeepers and artists built and installed the first prototype of urban beehive equipped with sensors in the Three Dragons Castle at the Ciutadella Park in Barcelona.

The short-term goal is to install in a building open to the public a new hive fitted with sophisticated sensors built on an open and low cost platform. The kit will send real time data about the state of the hive that will be accessible at least via the Internet. In addition, the permanent installation of the hive fitted with sensors wants to be an opportunity to raise awareness of the public about the importance of bees in the ecosystem as well as the perfect place for educational workshops on this topic.

Within the project Socientize, we organize a workshop to share experiences with Helsinki and Bordeaux. Mar Canet and Varvara Guljajeva will be the facilitators.

Our Urban Bees project is been selected by Socientize

Our project and Antimatter (CERN) will become new citizen science experiments in this EU project. We propose to build beehives in Barcelona, Bourdeaux, and Helsinki.

The 15 minutes TEDxRambles talk is now available on youtube. “We are bees, thus we exist” speaks of bees but especially of the need to maintain as a sicentist a link with the city and citizens.

TEDxRambles: We are bees thus we exist

Will I speak about bees in TEDxRambles the 4th of July at the Centre of Contemporary Culture of Barcelona? Yes, but mostly about the need as a scientist to keep in touch with city and citizens.

We have been invited to participate in TEDxRambles 2013

The theme: science, technology and consciousness. We need to alphabetize and illustrate ourselves on techno-scientific issues to make critical judgments.