You open the tap and water runs fresh. Yes, so obvious… But also, what a privilege! The access to drinking water is a basic human right recognized by the UN since 2010, even though in the world there are still more than 850 million people without a decent supply. Water is a basic and essential natural resource. We use it to drink, to take a shower, to cook, to water our plants, and to feed ourselves … but what if one day we wake up and there is no water?

The Aigua de Barri project was created as a proposal of the Museu de les Aigües and with the active participation of Ítaca, an organization in L’Hospitalet de Llobregat dedicated to the education in leisure of children and young people in the neighborhood. The project aims to ponder on the use made of water and the value given to it at a social and collective level.

Aigua de Barri is structured in eight sessions, during which the whole project is created and executed jointly, from the definition of the scope of study to its achievement and analysis of the data obtained. The first four sessions are devoted to designing the method and defining a basic question with which the whole experiment deals: How would you react if you woke up and did not have water? This topic is used to prepare a survey and a game that are carried on the street during the fifth session. Throughout a whole day, 126 residents of the neighborhood participate in the game and in groups of 6, they respond to a series of questions that directly imply their vision and awareness of water as a necessary and vital resource. To encourage participation, the game offers discount vouchers for local businesses, thanks to the collaboration of AMPAs Endavant.

The last sessions have the collaboration of graphic recorder Carlotta Cataldi, who helps translate the obtained data into a visual and attractive language. The interpretation of this data is done with a card game, a fun and entertaining way to bring the scientific method to the young people of the association. The last two sessions are focused on copying the whole process and the data obtained in a large mural that is also done collaboratively. The mural remains displayed in the Biblioteca Josep Janés (a public library), in the same neighborhood where the action was developed.

Aigua de Barri is a citizen science project that promotes the active participation of a group of young people who live in socially complex contexts to make them participants in social concerns and community processes. The data obtained will be used to know the particular relationship of the inhabitants of this neighborhood with water. 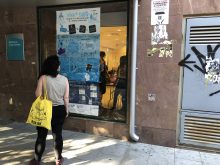 The closing action of Neighborhood Water consists of hanging the collaborative mural made during the previous session, in a public and visible place such as the Josep Janés public library. The mural remains as a witness of the process, contributes to give visibility to the project, to bring science closer to citizens and also serves as a reference point for all the young people who have participated in it. 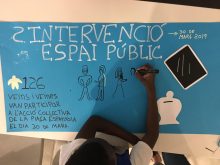 Turning the Neighborhood Water experience into a collaborative mural

Graphic recording is a communication tool used to translate activities, conferences and processes into attractive and visual presentations. Neighborhood Water has the collaboration of Carlotta Cataldi, a professional in this discipline, who helps to design a mural that summarizes the spirit of the entire project. The execution of the mural is totally collaborative, after some brief and effective lessons in calligraphy and drawing taught by the same Cataldi. 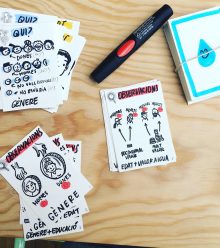 Explaining and interpreting the scientific data obtained can be done in a participatory and playful way. A deck of cards designed by the team of OpenSystems and Carlotta Cataldi serves as a game to show the results obtained, relate them and interpret them together. The project Aigua de Barri promotes co-creation from the beginning.

Ítaca's youngsters take scientific research out to the street

After four sessions of work and co-creation with OpenSystems and Museu de les Aigües, Itaca’s youngsters go out to the street to ask: How would you react if one day, when waking up there was no water? With this base question, we have elaborated a survey and a game. 126 neighbors of Collblanc-La Torrassa agree to participate and they collectively respond through electronic tablets. Their answers will serve to extract scientific data on the way the inhabitants of this neighborhood make use of and value water.