City Station is set in the proposal by the engineer and artist Natalie Jeremijenko and is the base for her Environmental Health Clinic in the public space of the city of Barcelona, in the Passatge Trullàs (District of Sant Martí). The Station consists of a series of infrastructures to carry out participatory actions in which the city’s people contribute actively to improving environmental health.

Civic action takes, within the exhibition project After the End of the World, the form of a series of recipes related to improving soil and air quality, or increasing greenery and biodiversity, among other things. With the emphasis on the collective research and public participation that characterise citizen science, the Station has the support of the scientific community and local bodies and organisations. The Oficina de Ciència Ciutadana (Citizen science office) of the Institut de Cultura de Barcelona is also contributing to the project, particularly in the form of the International School of Citizen Science, with researchers from all over the world taking part in this collective effort.

Visitors to City Station will be able to take part in as many as 16 workshops. Prior registration is required to take part from Monday to Friday. At the weekend, they will be open to the public. Opening times will soon be posted on the web for consultation.

City Station is a coproduction of the CCCB and the Institut de Cultura de Barcelona, the Department of Ecology, Urban Design and Mobility of Barcelona City Council, and the District of Sant Martí. With the collaboration of Taula Eix Pere IV.

Eight out of ten cities exceed the guidance levels of air quality determined by WHO. The first “Air Quality” Congress tackles this environmental emergency with the participation of more than 50 experts during two days, on October 23 and 24. Josep Perelló is part of the round table “Innovations in urban management: sustainable cities” and introduces xAire, a the citizen science project in which 20 primary schools have participated in monitoring the air quality of more than 800 points in the city of Barcelona.

OpenSystems to participate in the Venice Architecture Biennale 2020

The Catalan project for the Venice Architecture Biennale 2020, curated by Olga Subirós, vindicates the role of architects in the new ways of thinking and mapping cities with the climate crisis context. The installation of AIRE / ARIA / AIR, consists of a narrow corridor evocative of urban morphology in which air pollution will become visible and evident. Several groups, artists and studios collaborate in this project, among which, OpenSystems with xAire, a participated sampling of the concentration of nitrogen dioxide in the air. 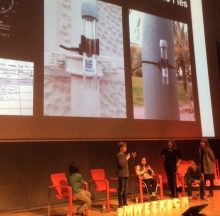 The Sant Martí School and Jaume Targa from 4sfera accompany us in the first public presentation of this action at the Disseny Hub Barcelona. More than 1,500 people from all over Barcelona participated in the action of February 16.

We install more than 800 tubes to measure NO2 throughout Barcelona

Students of 20 primary schools of the 10 districts of the city together with their respective families participate in this collective action that allows to put an unprecedented number of diffusion tubes in Barcelona.

Training session of the xAir experiment

We met with a hundred representatives of families and teachers coming from schools of the 10 districts of Barcelona for the collective measure of NO2 concentration throughout the city. Carolyn Daher (ISGlobal), Jaume Targa (4 sphere) and Maria Alonso (Mapping for Change) were presenting.