“The effect of electoral polls in a volatile party system” 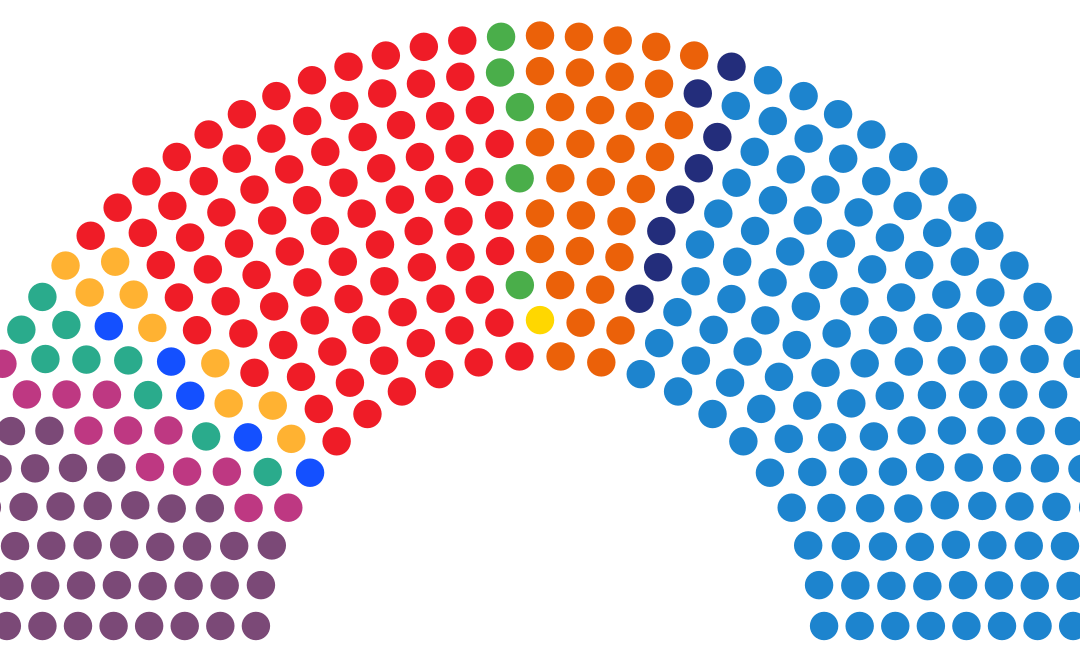 It is not unusual to find disagreement between what scientific studies claim and what much of the people think of a given topic. That is the case with electoral polls. When asked in a survey, a large majority of citizens deny any significant influence of electoral polls on their own behaviour on election day. However, political scientists have been discussing about this topic for decades (Gallup & Rae, 1940, Irwin & Van Holsteyn, 2000) and the debate is still alive. One of the reasons is that knowing about polls’ estimates may not affect all voters the same way. Because being more confident about the winning prospects a party has can be a strong argument to abandon another candidacy with farfetched options… If the policy positions they hold are close enough, on the voters’ judgement.

Aiming at understanding better the way in which voters make their mind up when they see changes in the preferences of the rest of society, we wanted to study the possibility of different bandwagon effects (i.e. parties performing well on polls are more likely to be supported by voters given their momentum) for traditional and new political parties in party systems under change. The idea is that, possible electoral gains set an incentive for voters to coordinate around political platforms they support (to some extent). But contexts of profound transformation can make that coordination tough. Under such circumstances, are the estimates of electoral polls more reliable than the previous experience for voters?

Searching for an answer, we set a survey experiment in Spain as a country in which the previous party system has experienced important changes in recent years. Taking advantage of the similar shares of vote that polls reported for PSOE and Unidos Podemos, the two main parties on the left, we wanted to see how people reacted to polls pointing to a clear gain in support of one of these two parties against the other. Considering the uncertainty attached to a reorganization of the party system, would voters rely more on past experiences or polls’ estimates?

What we did to find out was an online survey with the collaboration of NetQuest for a sample of 1,019 people living in Spain. The quota sample was set to meet some general features of the population of interest that could be unfulfilled otherwise—like age distribution. Among other questions, respondents were presented with a picture describing the evolution of the four main national parties in polls. For a third of them, chosen at random, this graph (the treatment) showed no change in the vote share of any party for the last months. Meanwhile, another third saw that in recent times the old-known party on the left, the PSOE, was going up while the newcomer Unidos Podemos was in a clear downwards trend. For the other third of the sample the situation was the opposite: Unidos Podemos was gaining support and PSOE was losing it.

After prompting respondents with that slide, we asked them how likely they were to vote for each of the main four parties on a 0 (not at all) to 10 (completely sure) scale. Additionally, we included a manipulation check asking survey-takers what happened on the treatment picture they saw. This is meant to measure how reliable the treatment effect can be pointed as the cause of observable variations in the experiment. If the participants didn’t pay attention and ignored the treatment vignette, it is unlikely this had any impact on them.

The analysis of the survey experiment takes into consideration how other participants’ features might affect their likelihood to vote for any of those parties. Those features considered are age, sex, educational attainment, ideological self-placement on a left-right scale and the fact that they felt somewhat identified with some party. To account for the fact that politically aware people could be harder to trick with the fake polls, news consumption is considered as a control variable too. The result of the manipulation check described was also computed in the statistical analysis.

What are the results? The graph below shows the probability of voting PP, PSOE, Unidos Podemos or Ciudadanos (on the vertical axis) for people of each of the three treatment groups. The first point on the left depicts the reported probability of voting for people in the treatment group with no change in the polls. The one in the centre is for the group presented with the polls favourable to PSOE and the point on the left is referred to the treatment showing Unidos Podemos on the rise.

The vertical colour lines represent the confidence intervals of the probability estimate. The range of those intervals across columns overlaps most of the times. So, we can find a single value of y that meets those three confidence intervals, which means that most of the results are not statistically significant at 5% or 10% levels. In other words, the differences in the variable probability to vote party n for each treatment group are not large enough (in a sample of this size) to be considered proven. In turn, this results provide some evidence that voters are not affected by polls estimates that much.

However, there is one case in which the predicted probability to vote for one party is indeed affected by the experiment in a scale large enough to be considered. It is not the probability to vote for UP the one that is altered, but the probability to vote for the (incumbent) People’s Party. Supporters of PSOE’s main political opponent in recent decades are more willing to say they will vote for the PP when presented with evidence that the socialist party is gaining ground. PP voters seem to react to tighter electoral competition with greater support for their preferred party, while voters from the other three main Spanish parties do not seem to do so. 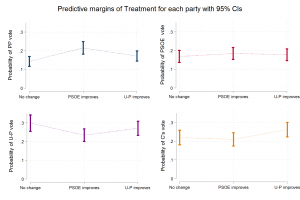 Apart from the treatment analysis, the results show ideology self-placement as the strongest predictor for the probability to vote each of the four parties, and that result is statistically significant for PP, Unidos Podemos and Ciudadanos—but not so for PSOE.

Back to those arguments explained at the start, this evidence is not supporting the hypothesis of electoral coordination within ideological blocs; not for the party with more volatile support, due to its recent integration in the party system, nor the veteran with a record of electoral victories in the past. Actually, the entry of new parties has been identified as an obstacle for effective voter coordination in comparative studies. As mentioned earlier, the only group of voters that react to the change in polls’ estimates are PP voters, who increase their probability to vote the party as the opponent PSOE improves its electoral outlook. In conclusion, the only type of voter reaction registered in this experimental setting for the Spanish case is restricted to higher competitiveness between ideological blocs and not electoral coordination within an ideological bloc.