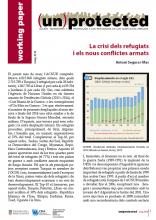 The current refugee crisis forms part of the context of new asymmetric conflicts that has characterised the post-Cold War period, and is a consequence of the same. Analysing the refugee crisis means analysing the armed conflicts taking place in the main countries of origin. A historical perspective of the analyses of these conflicts helps us to understand the origins and causes of the conflicts, as well as to better analyse how they evolve and their repercussions. A historical perspective helps us to understand the process of conflicts that become entrenched and continue, turning into long-term conflicts. Throughout history, the international community has developed mechanisms to aid and protect refugees. However, the humanitarian crises that have resulted from numerous conflicts show the failure of states to commit to protecting the civilian population and guaranteeing asylum for people who have to flee.

The United Nations includes a number of agencies involved in protecting refugees and human rights. Together with the International Committee of the Red Cross, they continue to establish the basic principles of international humanitarian law and, therefore, they regulate international guidelines for the protection of refugees. There is also a complex system of NGOs that offer humanitarian aid, and that carry out actions, with varying levels of success, to alleviate the effects of war, bear witness to events, and protect the rights and dignity of the civilian population in armed conflicts, as well as that of displaced persons and refugees. The documentation provided by United Nations agencies and international organisations is an indispensable source for studying the situation of refugees and the civilian population. It can also provide a better understanding of the challenges and limitations faced by the international community today in terms of offering protecting in the context of armed conflicts.

(Un)protected is a research project that aims to carry out analysis related to armed conflicts, humanitarian aid and protection for refugees. It aims to reflect on the humanitarian crises facing refugees today, from the historical perspective of armed conflicts in the countries of origin for refugees, to the role played by United Nations agencies and NGOs and their relationship with local and regional bodies, while also analysing EU policies towards particular refugee groups.

The project has been completed by focusing on case studies of Syria, Palestine and Afghanistan. These are three very different cases, but in each one the question of refugees holds particular importance. The case studies allow us to better understand concrete experiences in their corresponding local or regional context, in order to uncover common problems, challenges and opportunities.