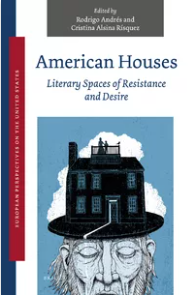 Already in 1854, Henry David Thoreau had declared in Walden that “Most men appear never to have considered what a house is” (225). Like Thoreau, many other renowned American writers have considered what houses are and, particularly, what houses do, and they have created fictional dwellings that function not only as settings, but as actual central characters in their works.

The volume is specifically concerned with the structure, the organization, and the objects inside houses, and argues that the space defined by rooms and their contents influences the consciousness, the imaginations, and the experiences of the humans who inhabit them.

The House as Alternative to Familial Space and Time in Herman Melville’s “I and My Chimney”, Rodrigo Andrés   17

Queering the American Family Home: The Aesthetics of Place and the Ethos of Domesticity in Alison Bechdel’s Fun Home: A Family Tragicomic, Elena Ortells   58

PART 2: THE LEGACY OF THE HOUSE DIVIDED

Cape Coast Castle in the Sky: Yaa Gyasi’s Homegoing and the Im/possibility of the American Dream, Cynthia Lytle   77

The Politics of Affect with/in the African American Mansion in Stephanie Powell Watts’s No One Is Coming to Save Us, Vicent Cucarella-Ramon   135

Too Tight for Comfort: Shipboard Distance as the Prerequisite for Personal Intimacy in Herman Melville’s White-Jacket, Arturo Corujo   190

Woody Guthrie’s House of Earth: A Manifesto in Adobe as a Response to Houselessness and Domicide in Post-Depression Years, Carme Manuel   226

“A house at odds with itself”: Barbara Kingsolver’s Unsheltered, Dolores Resano   266