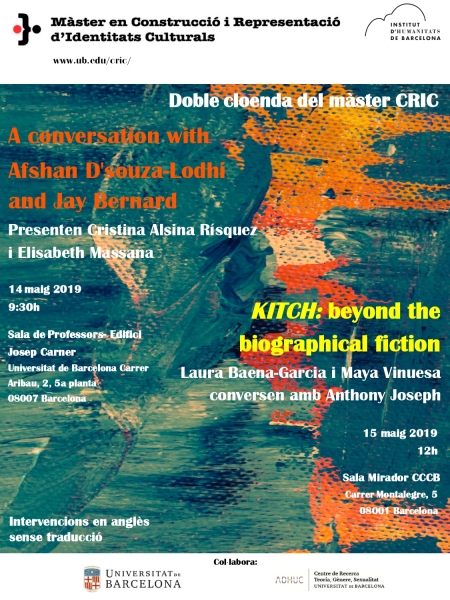 The MA in Construction and Representation of Cultural Identities (CRIC) and the Institut d'Humanitats organize, in collaboration with ADHUC, the closing event for the MA in Construction and Representation of Cultural Identities. This closing event will consist of two seminars: A conversation with Afshan D’souza-Lodhi and Jay Bernard, and KITCH: beyond the biographical fiction, by Anthony Joseph. The former will particularly focus on the connections among literature, community, and the individual; the latter will address the question of biographical fiction from an interdisciplinar perspective. Afshan D'souza-Lodhi, born in Dubai, of Hindu and Pakistani descent, writes drama, performance pieces and, occasionally, passive-aggressive tweets. She has participated in many writing residencies, and has been awarded with the Vinspired Award, The Big Issue in the North Award and The Community History Award. Jay Bernard are from London and work as both writer and programmer at the BFI Flare (the LGBT film festival at London). They are the authors of Surge (2018, awarded with Ted Hughes Award for New York in Poetry), The Red and the Yellow Nothing (2016), English Breakfast (2013), and Your Sign is Cuckoo, Girl (2008). Anthony Joseph, described as "the leader of the black avant-garde in Britain", is a poet, novelist, musician, PhD in creative and biographical writing, and teacher at the University of London. Apart from his poetic works, he is the author of The African Origins of UFOs (2006). His work, KITCH: A Fictional Biography of a Calypso Icon, will be translated into Spanish and published by Entre Ambos soon. Researchers Cristina Alsina Rísquez (ADHUC-Universitat de Barcelona), Elisabeth Massana and Maya Vinuesa (Universitat de Barcelona), and Laura Baena-Garcia (Universitat de Granada) will also participate in this double seminar. Interventions will be en English.