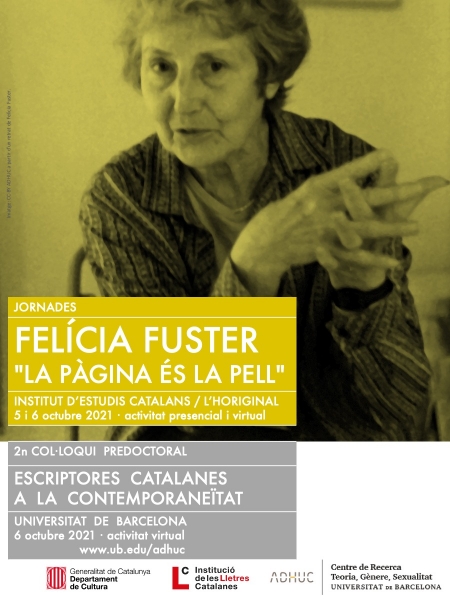 There are two seemingly contradictory movements in Felícia Fuster’s work. In her literature, a vindication of language which goes as far as metapoetic research, building new stanza forms and adapting haiku and tanka rhythms. In her painting, a progressive loss of figurativism toward an abstraction which multiplies its possibilities with the usage of different materials. However, Fuster’s conception of the poem as body and battlefield and her literary insistence on the dimensions and shapes of each stroke both confirm that all is one. Because her creation assumes an agonistic function no so much as the artist’s protest as her vitalist rereading and reconstruction of a tradition. A will to dig deep which we find in contemporary female writers. Hence this second predoctoral discussion within the Felicia Fuster Conference, coorganized by Helena González and Maria Isern (ADHUC-Universitat de Barcelona), Francesco Ardolino (Universitat de Barcelona), Lluïsa Julià (UOC) and Júlia Català (Institució de les Lletres Catalanes).

This second predoctoral colloquium aims to continue the work sparked in the first colloquium, held in 2019 at the University of Barcelona. This second edition has the goal of fostering research about Catalan writers in the contemporary era (from the 19th century to the present), as well as offer a meeting space for predoctoral researches at universities around the world to share their progress and participate in debates about their research. The role of female writers as creators is deeply rooted in the field of Catalan Studies. The wide-ranging and diverse methodological approaches available continue to struggle to attest to the abundant production in the field, especially considering the gaps that unavailable documentation creates. However, this also offers a great many possibilities regarding new questions from new frameworks (gender and sexuality theory, affect theory, nation, community and marginal studies…).

More information about the specifics of the Call For Papers and inscription details in the PDF. Free registration. Online Colloquium.