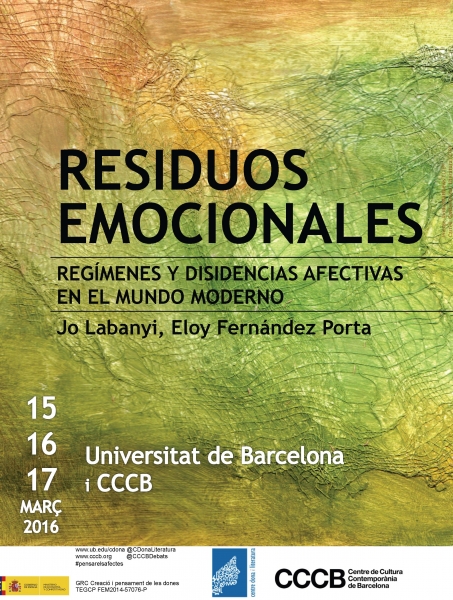 The final program of the international symposium “Residuos emocionales: Regímenes y disidencias afectivas en el mundo moderno” has been published. The symposium, coorganized by the Centre Dona i Literatura and the CCCB from 15 to 17 March, 2016, seeks to establish a dialogue over the concepts and experiences associated with "emotional residue", both in relation to its marginal status in the face of hegemonic emotional regimes and its resignigfication as political project and as a tool for affective dissent. Keynote speakers include Jo Labanyi (New York University), who will offer a critical overview of recent theorizations of affect and their relation to theories of the post-human, and Eloy Fernández Porta (Universitat Pompeu Fabra), who will reflect on the politics of ineffable feeling. The journal 452ºF organizes a round table entitled “Pensar el afecto desde la cultura y el arte” (Thinking about affect in culture and art) hosted by Rodrigo Andrés, María Teresa Vera-Rojas and Katarzyna Paszkiewicz, and there will also be a book presentation of Engaging the Emotions in Spanish Culture and History by Luisa Elena Delgado, Pura Fernández and Jo Labanyi, editors of the volume, who will be joined by Antonio Monegal. Finally, the program includes interventions by researchers from European, American, and Latin American universities.

The symposium is held as part of the activities of the research project "Teoria de les emocions i el gènere en la cultura popular del s. XXI". Attendance is free in every session, including the keynote addresses at the CCCB. Attendees can request a certificate of attendance, in which case they have to register, free of charge, at cdona@ub.edu before 13 March 2016, and attend all sessions.

The Centre Dona i Literatura is calling out for papers for the "Residuos emocionales: Regímenes y disidencias afectivas en el mundo moderno" Symposium, which will take place between March 15 and March 17, 2016 in both the Universitat de Barcelona and the CCCB. This Symposium, coordinated by Marta Font, Helena González Fernández, Katarzyna Paszkiewicz (Centre Dona i Literatura) and María Teresa Vera-Rojas (Universitat de Barcelona), aims at establishing a space for dialogue that will elaborate on emotional cultures and experiences, taking the theoretical framework set out by the "emotional residues" concept as a cue. The papers should seek to consider its marginal nature regarding the hegemonic emotional systems as well as (to) analyse its resignification as a political project and as an agent of affective dissidences.  Jo Labanyi (New York University) and Eloy Fernández-Porta (Universitat Pompeu Fabra) will be the keynote speakers. Papers for consideration, in Catalan, Spanish or English, can be sent up until December 9, 2015.