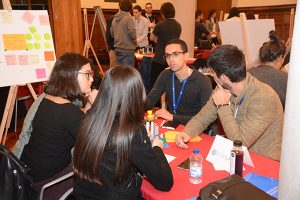 The Department of Business and the Vice-Rector’s Office for Entrepreneurship, Transfer and Innovation at the University of Barcelona led the Innovation Day (i-Day) in Barcelona, which aimed to bring university students to pursue a professional career related to innovation in health. The event gathered more than 70 students, researchers and health professionals in the Historic Building of the University of Barcelona on November 24th, 2018. Participants came from 11 different institutions, 17 countries and 21 areas of expertise.

During the Innovation Day, several experts gave their speeches to inspire students with their projects. Participants had to work in multidisciplinary groups on one of the proposed topics: nutrition, mental health, and environment and health. A challenge was given to each topic, so that students would have to find a solution with the help from a coach. At the end of the activity, a jury chose the best solution from each field, and an only winner among the final candidates.

The first prize was awarded to a group that had to solve how to promote positive mental health in universities. They proposed a chatbot through which the students would receive questions daily, in order to calculate the risk of suffering from depression or anxiety. The members of the awarded team will visit London in December, together with the winners of the other contests in Europe. Successful i-Day teams receive further support and resources to develop their project.

The second prize was given to a proposal to launch an app to encourage people to go on foot instead of using other means of transport. The third prize was awarded to an app to promote the increase of fruit and vegetable intake among youngsters, consisting of a series of discounts for healthy food in supermarkets and restaurants. Overall, 15 different teams participated in the event.

There is a total of eighteen Innovation Days around Europe taking place on the same day. These are organised by EIT Health, an international consortium formed by more than 140 leading companies, universities and research centres from more than fourteen European countries. The University of Barcelona is a core partner of EIT Health Spain.