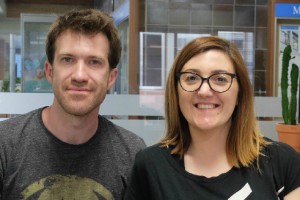 The Executive MBA students Liliana Carvalho and Guillem Vidal were each awarded a UB Business School sponsored European Talent scholarship in the academic year 2017-18. They benefited from a 50% discount on the tuition fee aimed at candidates with EU citizenship and outstanding profile and skills. Interested candidates for the next academic year need to send their application before May 2nd 2018 in order to be considered in the first round and June 30th 2018 to be considered in the second round.

Liliana and Guillem had already decided that they wanted to study the Executive MBA at the University of Barcelona when they applied for one of the European Talent scholarships. “Of course that the availability of these scholarships helped me to make the decision, but it was not a determining factor”, Liliana said. “It’s a real privilege to have been awarded one of these scholarships. It made things easier for me and has given me more confidence during this academic year”, she added. Guillem describes it in similar terms and says that “I knew for sure that this EMBA was in my interest”.

For more than 13 years Liliana has been working for a retail company in which she has been promoted several times. She had previously studied Human Resources at the Instituto Politécnico do Porto. On the other hand, Guillem is an informatic engineer by the Universitat Ramon Llull. Now he has more than six years of experience as a professional in the area of informatic systems at different companies.

In the case of Liliana, her company decided to fund the remaining 50% of the tuition fees. “I am lucky enough to work at a company which promotes the development of their employees. Every year we work on our career plan and mine included an MBA. From that moment where I decided to study it at the University of Barcelona I had the full support of my employer”, the student explained.

The goals after finishing the EMBA are quite different for each of the recipients of the European Talent scholarship. For example, Guillem wants to start his own business, while Liliana wants to assume positions of more responsibility in other departments of her company. “I already participate in a European leadership development project in my company. Only 10 employees in Europe were selected and I think that the fact that I was studying an EMBA was crucial when I was chosen for this project”, she said.

Both Liliana and Guillem have shown their support for this type of scholarships. “It is a good way for any business school to show that they support for talent”, Guillem explained. He also said that it means an “extra motivation for the beneficiary”. Liliana thinks that these scholarships allow that “everyone that has the interest and the skills to keep learning and developing their competences can access the programme regardless of their financial circumstances”.

“The UB Business School is the best option for those people that look for a good quality teaching and have set their goal on settling the fundamentals that any manager or entrepreneur should possess”, Guillem concluded.