15th July, 2022 – Special Mini-symposium IN²UB: A new dawn for magnetism: from Spin Qubits to the spin-orbit based magnetic memory and terahertz generation 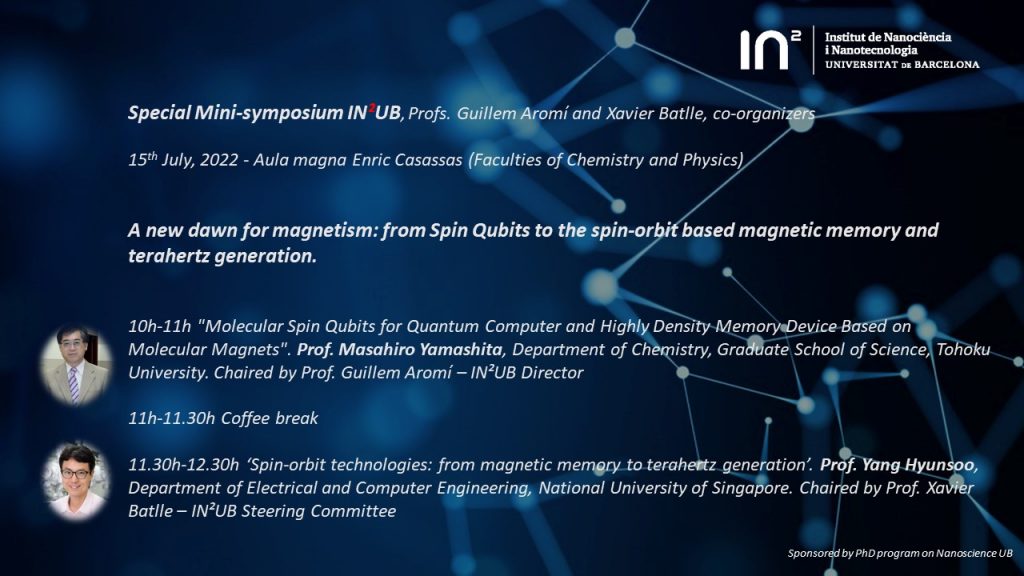 In frame of the International Research Seminars, the IN²UB organizes the specific:

A new dawn for magnetism: from Spin Qubits to the spin-orbit based magnetic memory and terahertz generation.

[Registration required to know the capacity. Until July 7th]

Over the last decade, spintronic research has focused largely on techniques based on spin-orbit coupling, such as spin-orbit torques (SOTs), to alter the magnetic state. I will discuss the latest trends in SOT research, such as the exploration of novel material systems like topological materials and 2D materials to improve the SOT efficiency. Moving forward, I will introduce the process of terahertz generation in magnetic heterostructures, where the spin-orbit coupling phenomenon plays a dominant role. I will discuss the details of how this terahertz emission process can be extended to novel material systems such as ferrimagnets, topological materials, and 2D materials. The final section will focus on how the terahertz generation process can be used to measure the interrelation between terahertz generation and the SOTs, which are linked by the underlying spin-orbit coupling.

Hyunsoo Yang obtained the bachelor’s degree from Seoul National University and the PhD degree from Stanford University. He worked at C&S Technology, Seoul; LG Electronics, San Jose, CA; and Intelligent Fiber Optic Systems, Sunnyvale, CA, USA. From 2004 to 2007, he was at the IBM-Stanford Spintronic Science and Applications Center, IBM Almaden Research Center. He is currently a GlobalFoundries Chaired Professor in the Department of Electrical and Computer Engineering, National University of Singapore, working on various magnetic materials and devices for spintronics applications. He has authored 220 journal articles, given 130 invited presentations, and holds 15 patents. Prof. Yang was a recipient of the Outstanding Dissertation Award for 2006 from the American Physical Society (GMAG) and IEEE Distinguished Lecturer of Magnetic Society for 2019.

Right of information in relation to the data processing: Assistants’ Right Information