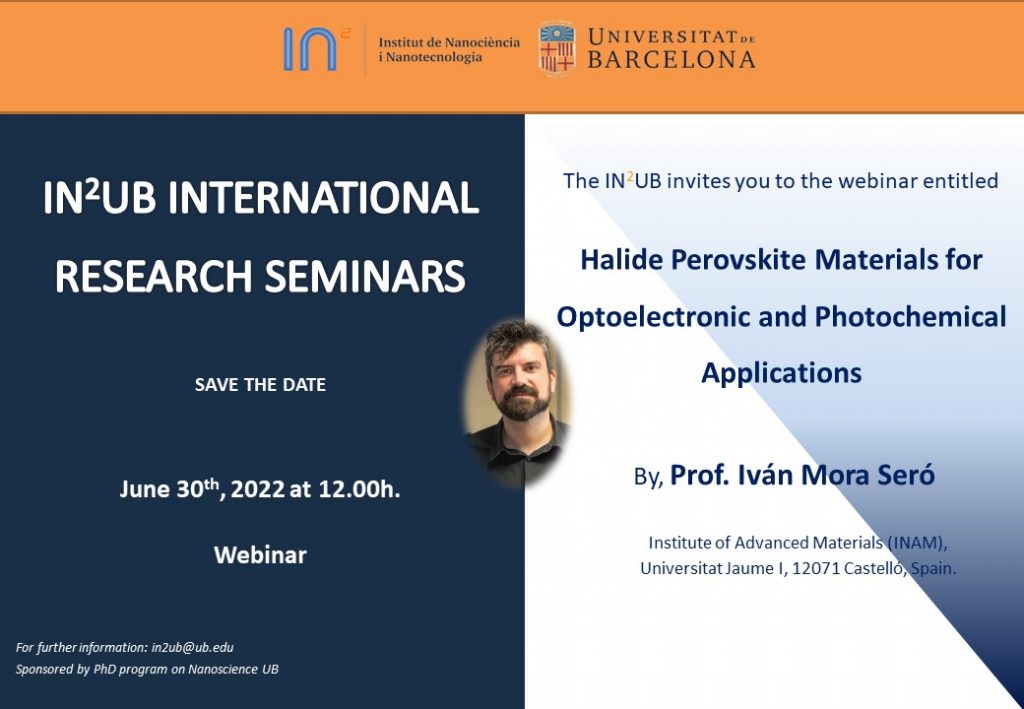 Iván Mora Seró (1974, M. Sc. Physics 1997, Ph. D. Physics 2004) is Full Professor at the Universitat Jaume I de Castelló (Spain). His research during the Ph.D. at Universitat de València (Spain) was centered in the crystal growth of semiconductors II-VI with narrow gap, setting up the first laboratory in Spain dedicated to the research with the epitaxial growth technique MOCVD (MetalOrganic Chemical Vapour Deposition). On February 2002 he joined the Group of Photovoltaic and Optoelectronic Devices of University Jaume I (UJI). At 2006 he started his own research line on quantum dot sensitized solar cells. Currently he is leading the Group of Advanced Semiconductors at Institute of Advanced Materials of UJI. He has published more than 240 paper in international research journal and 4 book chapters. He has been involved in more than 30 research projects funded from both public entities (University Jaume I, Valencian Region, Spanish government and European Union) and by private entities (Bancaja, IMRA). He has been PI in 11 project including 2 from H2020 and 2 from the 7th Framework Program from European Union. He has more than 100 contributions (more than 40 as invited speaker) to international conferences. He is inventor in 1 patent and he have been granted with: a scholarship from the Spanish Government for my PhD, a ‘Juan de la Cierva’ fellowship ‘Ramon y Cajal’ Fellowship both from the Spanish government and ‘Idea Award’ (2011), awarded by the Generalitat Valencia g, the “Research Award” from UJI (2019), Science Award from Radio Castelló SER (2020) and Excellent Researcher from Real Sociedad Española de Química. He has been granted with a fellowship from the Weizmann Institute of Science (Israel) in the year 2016. He has performed research stays at laboratories of France, U.S.A., Germany, Greece, Israel, Japan, Singapore and Malaysia. He serves as referee for numerous scientific journals (Nature, Nature Energy, Nature Materials, NatureNanotechnology, Nature Photonics, Nature Chemistry, Nature Communications, Chemical Reviews, Advanced Materials, Advanced Energy Materials, Nano Letters, ACS Nano, Journal of the American Chemical Society, Energy and Environmental Science, etc.) and as project referee and advisor for 15 national and private funding agencies (Spain,USA, France, Denmark, Germany, Belgium, Netherland, Poland, Canada, Israel, Qatar, Arabia, Saudi, Argentina, Chile and Slovenia.). Iván Mora-Seró has been included in the 2016, 2017, 2018, 2019, 2020 and 2021 Web of Science list of Highly Cited Rearchers (list that just contain 6000 rearchers around the world in all the science fields). Just 5 researchers in the area of chemistry in Spain appear in this list. Iván Mora-Seró is an ERC Consolidator fellow (Project: No Limit; Nº:-724424) His research at UJI has focus on nanostructured devices, transport and recombination properties, photocatalysis, electrical characterization of photovoltaic, electrochromic, and water splitting systems, making both experimental and theoretical work. Recent research activity was focused on new concepts for photovoltaic conversion based on nanoscaled devices and semiconductor materials following two mean lines: quantum dot solar cells with especial attention to sensitized devices and lead halide perovskite solar cells, been this last line probably the current hottest topic in the development of new solar cells. He is also currently involved in the development of light emitting devices (LEDs and light amplifiers) with these materials.