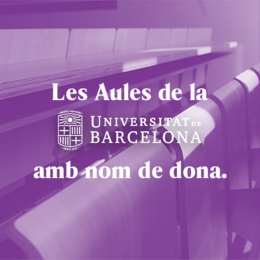 The University of Barcelona will name some of the faculties’ rooms after distinguished women. The campaign, part of the celebration for the International Women’s Day, is launched by the Vice-rector’s Office of Equal Opportunities and Social Action of the UB, in collaboration with the Equality Unit of the same University. The objective is to make UB women visible. For some cases, the rooms have been given names of the first women who graduated in that faculty; others are distinguished women in her discipline. The names have been accepted by the Dean’s team of each faculty, and in other cases, by the university community of that center.

The campaign for the visibility of UB women starts on Monday, March 4, naming the first room with a woman’s name: the boardroom of the new building of the Faculty of Law will be named after Maria Soteras Mauri (1905-1976), the first woman who graduated in Law at the UB (1921-1926) and first collegiate member in Catalonia (1927). The ceremony, to be hold at 12 noon, will count on the attendance of the rector, Joan Elias, together with the vice-rector for Equal Opportunities and Social Action, Maite Vilalta, and the director of the Equality Unit, Pilar Rivas, apart from the Dean of the Barcelona Bar Association (ICAB), Maria Eugènia Gay.

The naming of the rooms will continue during the entire week. On Tuesday, March 5, at 12.30 noon, it will take place in the Faculty of Library and Information Sciences. The working room 1 in the Information Science CRAI Library will be named after Rosalia Guilleumas (1924-2007), librarian and philologist, director of the Provincial and University Library of Barcelona (1969-1980), the Library of Catalonia (1973-1983) and the Barcelona Provincial Council Municipal Library Network (1973-1982) and the former School of Librarians (1973-1982).

On March 6, there will be two more ceremonies. At 12 noon, the Aula Magna of the Faculty of Earth Sciences will be named after Carmina Virgili (1927-2014), geologist, Gold Medal by the UB in 2011, and one of the first professors in Spain. At 1 p.m., the room 1010 of the Faculty of Economics and Business will be named after Joan Robinson (1903-1983), English post-Keynesian economist and lecturer at the University of Cambridge, distinguished for her work in the study of the economic growth in the fifties and the sixties, as well as on the theory of capital.

On March 7, at 2 p.m., the current boardroom of the Faculty of Psychology will be named after Victòria Sau (1930-2013), lecturer of the faculty and distinguished psychologist, writer and feminist. Next week, on Monday March 11, at 1 p.m., at the Faculty of Pharmacy and Food Sciences, the CRAI Library will be named Creu Casas Sicart (1913-2007), first lecturer of the Faculty. The upcoming activities to give name to the faculties will be announced over the following months.

Apart from this initiative, on the occasion of March 8, all campuses will hold several activities, organized by the equality commissions and student groups from the different faculties. You can find more information in this link.