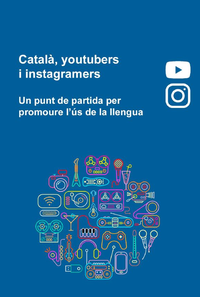 Marina Massaguer, Avel·lí Flors-Mas and F. Xavier Vila, experts from the Research Center in Sociolinguistics and Communication (CUSC) of the Faculty of Philology and Communication of the UB, are the authors of the first study on the language selection in content offered by stars of the digital field with most influence among the adolescent and young audience in Catalonia.

The study, Català, youtubers i instagramers. Un punt de partida per promoure l’ús de la llengua, analyses the uses of Catalan in content offered by the stars of the digital world, aimed at young audiences. It makes proposals to promote Catalan in this field. The study has been published and funded by the Department of Culture of the Catalan Government through the Directorate-General of Language Policy.

This is the first study on the language preferences of content offered by this kind of issuer. It analyses the financial and ideological factors that favour the selection of Spanish in this field, but it also shows the consolidation of a place for the creators in Catalan language, with a notable impact. Also, the report includes a series of proposals to promote the use of Catalan in the content shown in the networks, in order to stop online diglossia and favour the functional integrity of the Catalan language.

The study, which prioritizes the qualitative method, includes some quantitative analysis that reveal the contract in absolute figures among the metrics of influences who use Spanish and those who use Catalan. Such metrics are dramatically reduced when compared to the dimension of the language community, so when we put it like that, Catalan Instagram offers better results than Spanish ones, and an important approximation occurs in Youtube.

Among other aspects, the report analyses the movement of the audiovidual use to the networks, the consolidation of youtubers and influencers as young models in this field, the degree of professionalization and the reasons that cause the minority of Catalan, which are held between market dynamics and ideological ones.

It presents action lines such as the financial stimuli to the positioning of Catalan content in the platforms, supplementary pay for visits to compensate youtubers and influencers the difficulty to make money out of their efforts in platforms with monetization scales which are thought for global languages, funding of specialized content in Catalan, providing contacts between companies and microinfluencers who use Catalan to favour sponsor agreements, and the promotion of the presence of Catalan influencers in events to adopt the online reproduction to their working formats.