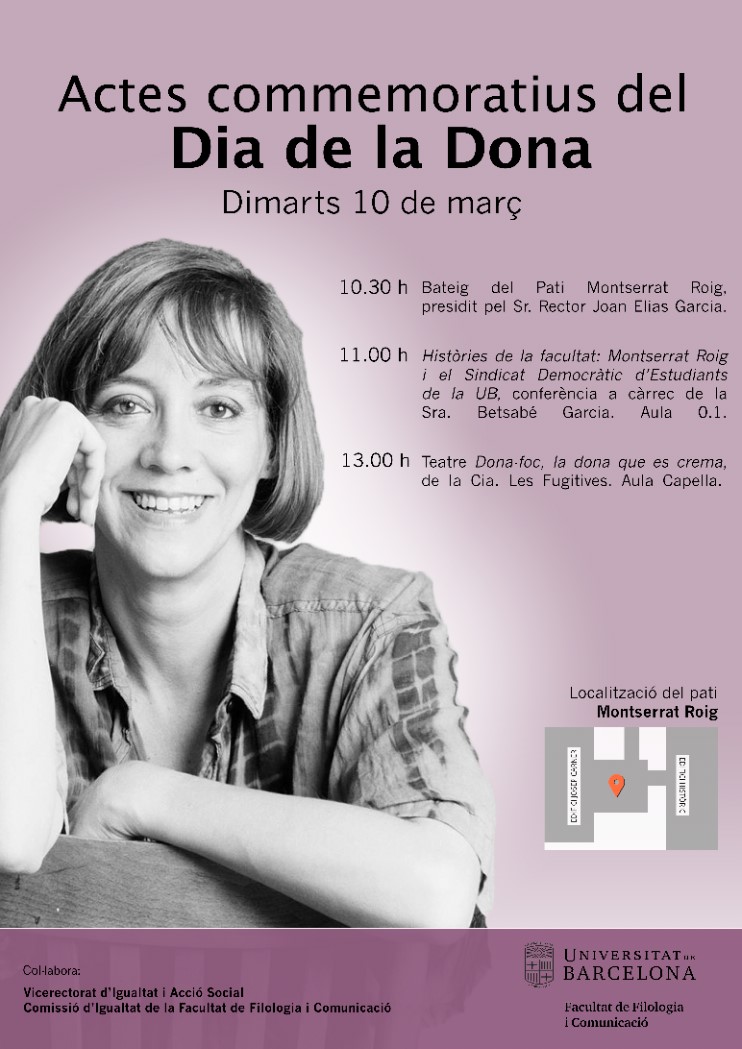 The Faculty of Philology and Communication joins the campaign launched by the Vice-Rector’s Office for Equality and Social Action to give visibility to the woman of the University of Barcelona and it does so giving the name of Montserrat Roig to the place that joins the Historical Building with the Josep Carner building. With this action –framed within the activity program of the International Women’s Day-, the Faculty wants to honor the figure of the writer and journalist from Barcelona (1946-1991), who combined communication, literary creation and teaching during her life, and prioritized some of the university values such as defending the rights of women and the commitment to freedom.

The Montserrat Roig Courtyard will be officially named on Tuesday, March 10, at 10.30 a.m. in an event in which a plaque will be unveiled with the name of the place together with a quote by the writer: “Reading, like writing, is a solo game. But you do not die that much if you know how to read”. Among the attendees will be the rector of the University; Joan Elias; the vice-rector for Equality and Social Action, Maite Vilalta, and the dean of Philology and Communication, Javier Velaza, as well as the editor Pau Vinyes Roig, Montserrat Roig’s nephew.

After this event, there will be other activities related to the writer and journalist that will be framed within the International Women’s Day. At 11 a.m., Betsabé Garcia, biographer of Montserrat Roig, will offer in the room 0.1 in Josep Carner building, the conference “Històries de la Facultat: Montserrat Roig i el Sindicat Democràtic d’Estudiants de la UB”. At 1 noon, the Aula Capella will be the stage for the theatre play Dona de foc, la dona que es crema, by the company Les Fugitives.

Together with these activities, the room Piferrer of the Central Section of the Philology Library has organized an exhibition titled “Montserrat Roig: chronicler of a time and a country”, which will be available from March 4 to 18.