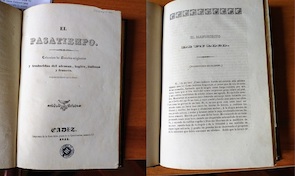 An article published in the prestigious journal Dickens Quarterly discovered what could be considered to be the first direct translation of a Dickens text from English to Spanish. The article explains the research on this finding by the lecturer John Stone, from the Faculty of Philology and Communication.

The oldest translation of a Dickens text to date is from 1847, but is a Spanish translation written after a French translation, not a direct English-to-Spanish translation. The text Stone found was in the Biblioteca de Catalunya (Library of Catalonia), in a copy of El Pasatiempo: colección de novelas originales y traducidas del alemán, inglés, italiano y francés, which was published in Cadiz in 1844 by a group of friends aged around twenty. This volume gathers unsigned translations of short narratives by Agnes Strickland, Friedrich von Schiller, John Galt, Alfred de Vigny, Abraham Elder and Charles Dickens. Three out of the British writers in the collection ─Dickens, Galt and Strickland─ were already known by the English readers of the time.

This volume in El Pasatiempo includes some firsts: the only known translations into Spanish of the Strickland and Elder texts, the first translation into Spanish of a tale by Galt, and the first Spanish translation of Dickens’ fiction piece “A Madman’s Manuscript”, a first-person crime narrative, read by Mr. Pickwick in his room at the Leather Bottle Inn, in Cobham, to combat sleeplessness, in the chapter 11 of the Dickensian novel The Pickwick Papers.  Stone defends this to be a direct translation, and therefore, it would be the first English-to-Spanish translation of any text by Dickens. The translators would probably be William (Guillermo) Macpherson (Gibraltar, 1824 – Madrid, 1898), a known diplomat, naturalist and archaeologist, and the most prominent translator of Shakespeare of the 19th century in Spain.

The arrival of books from British prints by sea to the Spanish coastal cities such as Cadiz, is, according to Stone, one of the reasons for this early English-to-Spanish translation. Most of the English books that landed in Madrid during the same period were printed in France beyond the reach of copyright protection or English editions that were sent to France and then re-sent to Spain. In broad terms, the Spaniards got familiar with the English literature, during the first half of the 19th century, thanks to the interaction between English-speaking immigrants and returning liberal exiles who had resided in London.