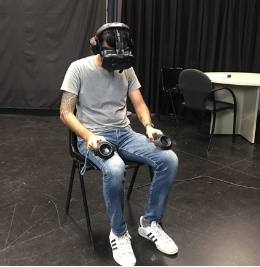 Research on virtual reality started in the eighties, but it is now that good quality is available to the public and it can become a mass consumer product soon. However, there is almost no scientific knowledge on the effects of virtual reality in the long run, nor any oversight over content. An international group of researchers, with the participation of Mel Slater, director of Event Lab in the Faculty of Psychology of the UB, has published a new paper in the journal Frontiers in Virtual Reality reflecting on potential ethical problems of mass spread of virtual and augmented reality. Researchers warn about the dangers that might arise as these technologies becomes more and more realistic and urge for new research to address these scenarios.

Virtual reality started more than forty years ago in a form we would recognize today: a stereo head-mounted display, head tracking, and computer graphics generated images. Despite different ups and downs in the development of the technology, a huge amount of research has been carried out across a vast range of applications in the last twenty-five years: from medicine to business, from psychotherapy to industry, from sports to travel.

However, its possible negative effects have not been explored, especially when very high quality visual and behavioral realism of virtual humans is becoming increasingly likely in the near future. Elements and even experiences in virtual or augmented reality may become indistinguishable from reality very soon. “For example, a normal computer game may be violent, but it is violence depicted through a screen, involving tiny characters. In VR you are part of the scenario, everything happening is around you, the characters are life-sized, they can look you in the eye. This is a qualitatively different type of experience compared to video games or movies,” said Mel Slater, also a member of the Institute of Neurosciences of the UB.

“Virtual Reality has been used almost exclusively for the good, mostly focused on psychotherapy, but - continues Mel Slater – like any technology, it can be used for good or evil. In order to prevent its use for evil we need better scientific understanding, and therefore research into its effects.”

Limits between reality and virtual experiences

In order to reflect about potential dangers of virtual and augmented reality the working group set out to consider possible worst-case scenarios and possible areas of research to address these. They concentrated mainly on problems that might arise as XR becomes more and more realistic. As virtual reality becomes more real people may find it difficult to distinguish between reality and virtual reality. For example, remembering virtual events as if they had been real, and failing to distinguish over time events that really happened and those that happened in virtual reality.

Researchers also highlighted another potential problem with an ultrarealistic experience: we don’t know what are the after effects and mental consequences of using virtual reality - for example in extreme violent games – and of the real-world transition from virtual reality.

“After an intense and emotional experience in virtual reality, you take the headset off, and you are suddenly in the very different real world. We are not good at rapid adjustment of behavior and emotion regulation. Re-entry to the real world, especially after repeated exposure to virtual reality, might lead to disturbances of various types: cognitive (did something happen in XR or in real life?), emotional (cause of emotions is not real, for example your avatar was insulted by a fictional virtual character), and behavioral: for example, actions accepted in XR may not be socially accepted in the real world),” explained Mel Slater.

Social isolation is other issue highlighted in the paper. “It is possible that some people may use XR to such an extent that they lose social face-to-face contact with other people so that people withdraw from society,” said Mel Slater.

Some other issues they warn against were data privacy and the dangers of identity impersonation and fake news. “People (e.g., politicians) could be shown to carry out actions in virtual reality that they never did in reality. Although the same is true with just video, in virtual reality it is more powerful because it seems to happen life-sized in the same space in which you are located. It happens in front of you, not through a screen,” said Slater.

A regulatory regime similar to cinema

Given these ethical challenges, researchers highlighted that there is essentially no data that can help in addressing them. So, besides the potential problems, some important research questions are outlined in the paper, such as the long-term effects of XR use, or whether XR experiences can be used to manipulate memory, or if people will continue to distinguish real from virtual events.

“It is especially important to make the creators of virtual and augmented reality applications aware of these possible dangers. However, this must be based on scientific study rather than opinion, so an urgent consideration is the funding of interdisciplinary research to address these and other issues. The most important is scientific research that could form the basis of a regulatory regime such as there is for cinema, with classifications of content by age and other conditions,” said Mel Slater.

After this research paper, the working group will continue with regularly meetings and discussion. “We plan to hold a one-day Workshop for Industry where we present these issues in a public forum, and form a more permanent working group from this to advise industry, government and international bodies,” said Mel Salter.