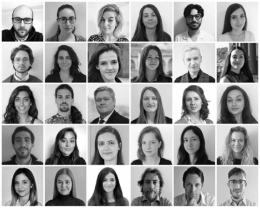 An international collaboration replicated one of the most influential studies in the field of behavioural sciences, the study that led to the prospect theory, which changed the wat to understand how people make decisions and interpret risks. The study has tested the results of the article published by Daniel Kahneman and Amos Tversky in 1979. This work was so impressive that Kahneman was awarded the Nobel Prize in Economics in 2002, and it is the most cited study in economics and one of the most cited in social sciences.

Anna Cortijos Bernabeu, former student of the Faculty of Psychology, took part in this study while she was studying the master’s degrees in Research on Behaviour and Cognition and Psychosocial Intervention. The study, published in the journal Nature Human Behaviour, was carried out as part of the Junior Research Programme, a research program managed by volunteer academicians and students, which offers the opportunity to start in the field of research in an international context.

The study was based on a large international sample, larger than the one in the original study, with data taken from more than 4,000 people from nineteen countries and speakers of thirteen languages. Researchers, supervised by Kai Ruggeri, from Columbia University, used very similar methods to the ones from the 1979 study.

Response patterns were similar to the original study

These results confirm that response patterns in decision-taking in risky situations are similar to the ones in the original study, although the size of its effect is inferior. “We can still say that people take more risks to avoid a loss but we assume less risks when we are offered choices presented as potential gains. Also, this fact seems to be general in many parts of the world”, notes the researcher.

The importance of this study is framed within the result replication crisis undergone in psychology and other related sciences. During the last years, theories that were consolidated have been questioned due a lack of work reproducing results of the studies they were based on. “The prospect theory, now consolidated, has been used to implement guidelines, strategies and public policies in areas ranging from economics to behavioural sciences. Therefore, having replicated results is very relevant and a reason to be relieved”, concludes Anna Cortijos.