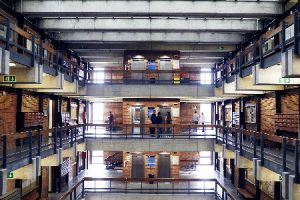 Sergi Basco: He has joined the Department of Economics as an associate professor. He is also a research fellow in MOVE Foundation. He received his PhD in Economics from the Massachusetts Institute of Technology (MIT) in 2010. Sergi Basco’s research and teaching fields are International Economics and Macroeconomics. His work focusses on understanding the effects of globalisation.

Sergi Lozano: He has joined the Department of Economic History, Institutions and Policy and World Economy as an associate professor. He was awarded a PhD in Sustainability, Technology and Humanism from the Polytechnic University of Catalonia in 2008. His research focuses on social complexity, cultural evolution and past long-term social processes.  To his end, he adopts approaches from complex systems and applies methodologies like network analysis and computational and mathematical modelling.

Alessandro de Chiara: He has joined the Department of Economics as an assistant professor. He obtained his PhD in Economics at the Université Libre de Bruxelles (ULB) in June 2015. Since August 2015, Alessandro de Chiara has been an assistant professor in the Department of Economics and Business at Central European University (CEU). His main fields of research are Organisational Economics, Procurement & Regulation, Behavioral Economics, Industrial Organisation, and Law & Economics.

Andreu Arenas: He has also joined the Department of Economics as an assistant professor after being hired on the international job market. Previously he had been a postdoctoral research fellow at the Barcelona Institute of Political Economy and Governance (IPEG) and an Adjunct Professor of Economics at Universitat Pompeu Fabra (UPF). He obtained his PhD in Economics at the European University Institute (EUI) in 2016. His research interests are in Public Economics, Political Economy and Economics of Education.

Ana Moragues Faus: She will join the Department of Economic History, Institutions and Policy and World Economy as a Ramón y Cajal research fellow. Ana actively engages in action-research processes and combines a set of critical theories such as political ecology and participative justice to support the development of more just and sustainable food systems. At the moment, she is developing novel concepts and practical approaches in the field of urban food governance. She was awarded a PhD in Agricultural Economics, Sociology and Policies at the Polytechnic University of Valencia in 2011.

Alexsandros Cavgias Martins Fraga: He is a postdoctoral researcher the Department of Econometrics, Statistics and Applied Economics after being recruited on the international job market. He was awarded a PhD in Economics at the Bocconi University in 2019. His fields of interest are Development Economics and Political Economy.

Maayan Mor: She is a new postdoctoral researcher at the Institutions and Political Economy Research Group (IPERG). She recently finished her PhD in Political Science at the University of Wisconsin-Madison. Her research interests include Political Parties, Political Identities, Political Institutions, Historical Development and Democratisation with a regional focus on Western Europe. She also has a methodological interest in historical research and causal inference.

Ingrid Mauerer: She is a new postdoctoral researcher at the Institutions and Political Economy Research Group (IPERG). She received her PhD in Political Science and Statistics in 2016 from the Ludwig Maximilian University of Munich. Her research interests lie in statistical modeling of political behavior and preference formation. She has specialised in categorical data analysis and discrete choice modeling as well as policy-based voting and party competition.

Marc Guinjoan: He will join the Institutions and Political Economy Research Group (IPERG) in January 2020. He received his PhD in Political Sciences at the Universitat Pompeu Fabra in 2012. His research interests are focused on political behaviour, elections, electoral systems, party strategies and populism, as well as on processes of decentralisation, identities, the theories of system justification and political psychology.