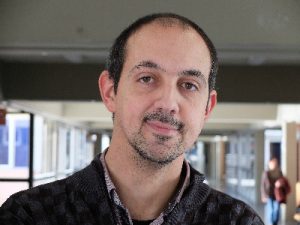 Francesc Amat has recently been awarded a Postdoctoral La Caixa Junior Leader Fellowship. He has been one of the 30 young researchers selected by La Caixa Foundation who will benefit from funding that will allow them to continue their research at a Spanish university. Francesc plans to study the causes of the growing political discontent and populist votes that we observe in many democracies. Francesc got his PhD from the University of Oxford in 2014 and from October 2017 he joined as a research fellow the Institutions and Political Economy Research Group (IPERG), supported by the UB School of Economics.

What was your first reaction on being awarded one of the Junior Leader Fellowships?

I was, of course, very happy. I am very aware of the scarcity of faculty positions and research grants at the moment. Given this, being awarded with a Fellowship is a privilege that I really value. In fact, the funny anecdote is that I knew it just the day after my daughter was born. We were still at the hospital when the selection of candidates was published by La Caixa. So it was an accumulation of excellent news. But in any case, what is relevant is that the Junior Leader Fellowship will enable me to complete my research projects and develop new ones. It is important, in fact crucial, to have time and resources to engage with an ambitious research agenda. And that’s what the Fellowship provides: time and resources.

According to La Caixa Foundation, Junior Leader Fellows shall raise questions that will help to make this a better world. How does your project contribute to this goal?

My main goal is to provide explanations for the rise of identity politics and political discontent. In other words, I want to shed light on the political consequences of economic shocks. I will explore the formation of political preferences and multidimensional party competition. Specifically, I plan to study the platforms of political parties in response to rising economic inequality and immigration in advanced democracies. I also want to develop experiments analyzing the relationship between economic shocks, political trust and redistributive preferences. My impression is that we lack fundamental explanations and systematic empirical evidence in order to understand voters’ motivations. It is clearly too easy to say “voters are fools”. In fact, oftentimes the elites make that mistake. But voters are not fools and we must better understand the logic of political behavior.

What is the expected outcome of your research?

My objective is to publish a set of papers in top journals in political science and economics. Publishing in top journals is crucial to maximize the impact of research and that is my ambition. Top publications is what provides access to more resources and the ability to start new projects. Additionally, if the set of papers that I will produce make sense together I might also consider drafting a new book manuscript. In fact, I just got a book manuscript accepted and under contract with Cambridge Univeristy Press (CUP), co-authored with Pablo Beramendi from Duke University, in which we explore the relationships between economic inequality and political inequality. The experience of crafting a book manuscript has been pretty exhausting but also very worthwhile. So I might well do it again!

Do you think that the IPERG and the UB School of Economics provide a good environment to carry out your research project?

Yes, indeed. The Institutions and Political Economy Research Group (IPERG) is fully devoted to research. At IPERG we have a very lively research environment: with regular seminars, international visitors, and a group of postdoctoral researchers. Additionally, at the UB School of Economics there are other research groups with whom we interact regularly. Specifically, the people at the political economy group at the IEB and the economic history group at the Department of Economic History. Right now, there are real interactions between economists and political scientists at the UB. That is very exciting and I would say that the UB is one of the unique places in Europe in which there are real and meaningful interactions between economic historians, political scientists and political economists. We should really take advantage of this because it is so hard to find.

How is this study linked to other IPERG research projects?

The IPERG group is engaged in a big ERC project, an ERC Advanced Grant, leaded by Carles Boix, which studies the origins and development of mass parties in the late XIX century. In fact, IPERG is very strong in the fields of political economy and history and politics. Instead, in my project I will work with contemporaneous data mostly at the individual level. However, the ambition is very similar in the sense that the final objective is also to understand the incentives of political actors: the motivations of both voters and political elites. In fact, there are instances of clear overlap. For example, with Carles Boix, Jordi Muñoz and Toni Rodon we have a paper exploring the effects of political mobilization on electoral participation in Barcelona during the Spanish Second Republic. Maybe paradoxically, working with historical archival data is also a very interesting way to approach current key questions such as the sources of political mobilization and political activation.