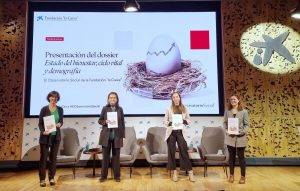 The indicators on the desired fertility in Spain contrast clearly with those of real fertility, and this results in one of the largest gaps in Europe. This is one of the conclusions of the dossier on Welfare state, life cycle and demography of the “la Caixa” Foundation Social Observatory, coordinated by Ció Patxot, UB School of Economics researcher, which also includes an in-depth analysis of intergenerational equity as a guarantee of social welfare.

The first study “Why do women not have all the children they say they want to have?”, by Alicia Adserà, a professor and researcher at the School of Public and International Affairs of Princeton University, and Mariona Lozano, of the Centre for Demographic Studies (CED), indicates that at all age stripes Spanish women express a desire to have  two children. A data contrasting with different indicators on real fertility, among which it highlights that Spain has one of the lowest fertility rates in the world (1.3 children per woman) and that the average age of women at the birth of the first child ranks among the highest internationally (30.9 years).

The main factors that cause this gap between desired and real fertility are the adverse conditions of the labour market, the difficulties in creating a family, increasing instability in couples, and the lack of support to facilitate work-family reconciliation. This outcome is confirmed by the results of the second study, which quantifies the impact of welfare performance throughout the life cycle taking into account production within the household of dependent goods and care. The results measure the bias between the contribution of men and women and show that the welfare state socializes the cost of large dependants, while leaving the cost of children in charge of families. The results come from studies by Ció Patxot in collaboration with other researchers: Gemma Abio i Meritxell Solé (UB), Elisenda Rentería (CED) and Guadalupe Souto (Autonomous University of Barcelona).