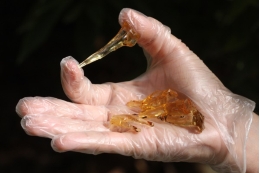 An international team of experts recovered the DNA of trapped beetles in samples of resin collected from 2013 to 2017 in the Madagascar forests, according to a study published in the journal Plos One. The study explores new limits of conservation of genetic materials in resinous samples, and counts on the participation of Xavier Delclòs, professor at the Faculty of Earth Sciences and member of the Biodiversity Research Institute (IRBio) of the UB.

The study is led by the experts David Peris, who got his doctoral degree at the UB under the supervision of Xavier Delclòs, and Kathrin Janssen, both from Bonn University (Germany). It is also signed by Enrique Peñalver, from the Spanish Mining and Geology Institute (IGME), and Mónica M. Solórzano Kraemer, from the Senckenberg Research Institute (Germany), among other experts.

According to Professor Delclòs, “the rock of organic origin that better preserves organisms from the past is amber. If you look into the remains of organisms inside resins or amber, you can see the bodies in three dimensions and all the characters are well-preserved. In particular, the resin keeps the exoskeletons of these arthropods very well –which are mainly formed by chitin– or the leaves from producing trees. However, internal organs usually decompose when the organism is included by the resin. If a molecule like DNA could be preserved over time, the container should be amber. Therefore, there is controversy to try and extract genetic material from dinosaurs –think Jurassic Park– inside the DNA preserved in blood-sucking insects from the Cretaceous”.