Last week the city of Barcelona hosted the IV European Geographies of Sexualities Conference, which was extremely successful. The conference lasted for three days and a wide range of scholars presented papers, panels and organised debates on multidisciplinary studies. The programme offered a variety of axes around which seminars where organised. 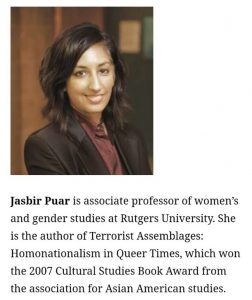 Jasbir K. Puar’s, keynote speaker, talk entitled Homonationalism in Trump’s Times was particularly awaited. Her intervention was a logical segue to her infamous book, Terrorist Assemblage: homonationalism in queer times, Duke University Press (2007), which is an insightful study on biopolitics and colonial propaganda. In this book, Puar invites us to familiarise with the term Homonationalism, a phenomenon implies the deployment of LGBTI community’s rights in the fulfilment of xenophobic, islamophobic and racist state policies as in the discourse of war on terror. This concept, Puar insisted, is not a descriptive term of individual or social behaviour, but rather, a transitional process during a historical juncture.

Homonationalism is based on the management of queer life at the expense of other sexualised subjectivities by polarising nationalised queer subjects in juxtaposed political contexts; for instance, the partial normativising of LGBTI’s rights advocated by the U.S. nation-state as opposed to the sexuality of people or communities coming from countries that still criminalise homosexuality, often Muslim countries. This process, simultaneously, produces terrorist bodies that are subject to sexualised and racist geographic, political and media exclusions, deportation, detention and war. 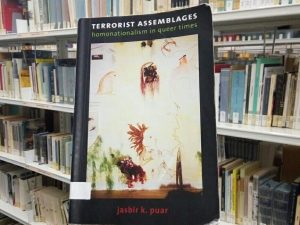 Needless to say Terrorist Assemblage is a rigorous critique of biopolitics where a brilliant vision detangle the complexities of the discursive relations between queer theory and the machine of war. What might be necessary, here, is to remind the reader of the urgency of such analysis addressing the victims since this work, clearly, addresses Western scholars who had, meritedly, embraced it with ovation.