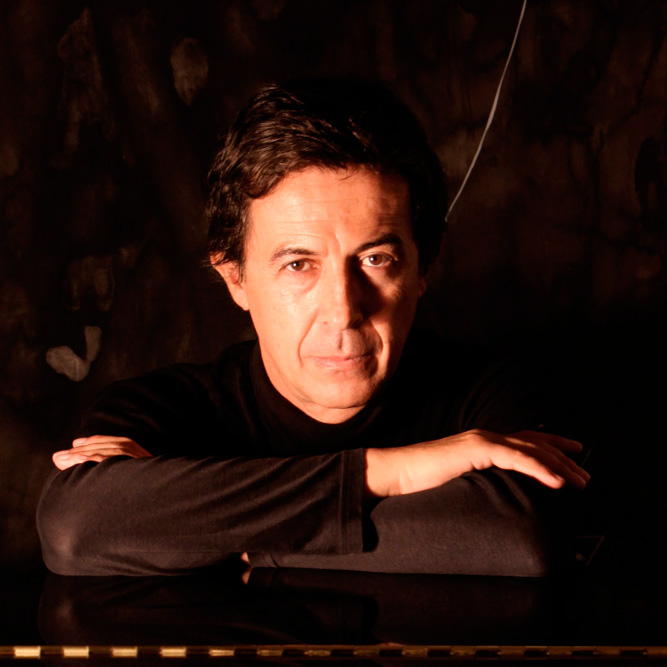 Pedro Alcalde is a composer, orchestra conductor, pianist and musicologist.

His works include compositions of acoustic, electroacoustic and electronic music, for dance, theatre, cinema, sound installations and mix-media for orchestra and electronics, premiered in important concert halls and opera houses around the world, such as the Berlin State Opera, the Teatro Real in Madrid, the Teatro Chatelet in Paris, the Mossoveta Theatre in Moscow, the New York City Center , the Sydney Lyric Theatre, or the Sónar Festival and the Gran Teatre de Liceu in Barcelona, among others.

Pedro Alcalde holds a PhD in Philosophy and Musicology from the Freie Universitat in Berlin, a Master of Arts from Columbia University in New York, and a degree in Philosophy from the University of Barcelona. He majored in Orchestral Conducting at the Vienna University of Music and Performing Arts, later being assistant conductor of the Vienna State Opera and the Berlin Philharmonic with Claudio Abbado. He is a founding member of the Nonoprojekt of the Fondazione L’Unione Europea in Berlin, with the aim of inspiring young people to reflect on the idea of freedom, democracy and tolerance through musical programs. He has been professor of composition at the Escola Superior de Música de Catalunya (ESMUC) and between 2009 and 2015 he taught as a guest professor in the Aula de les Arts of the Carlos III University of Madrid.

Previous projects and collaborations include: eleven ballets with choreographer Nacho Duato performed worldwide: Herrumbre (2004),  Diecisiete  (2005),  Alas  (2006),  Hevel  (2007),  Cobalto  (2009) and  Jardín infinito  (2010) for the National Dance Company; Rust  (2013) and  Depak Ine’s final scene (2014) for the Martha Graham Dance Company in New York; Static Time  (2015) and  Erde  (2017) for the Staatsballett in Berlin and Deuces / Julia  (2019) for the Gauthier Dance Company in Stuttgart. He has collaborated with leading electronic music artists such as Pan Sonic and Richie Hawtin at the Sónar Festivals in Barcelona in 2004 and 2005 and later with Richie Hawtin at the Staatsoper berlin in 2017. He composed Infinito for the theatre company La Fura dels Baus, a play for orchestra and electronics based on the myth of Prometheus, which premiered at the Roman Theatre of Merida in 2005. He directed the music composed by Alberto Iglesias for the film The Dancer Upstairs, John Malkovich’s director debut, performed by the Madrid Symphony Orchestra with soloists from the Berlin Philharmonic. The film won the Nino Rota Award for Best Soundtrack at the 2002 Venice Film Festival. In 2013 he composed the music for the second act of multimedia opera El Somni of Franc Aleu and El Celler de Can Roca. This interdisciplinary work was also presented as an exhibition, a book and a film. The film premiered at the 65th Berlin International Film Festival in 2014. From 2015 to 2018, he regularly conducted the Berlin State Opera Orchestra.