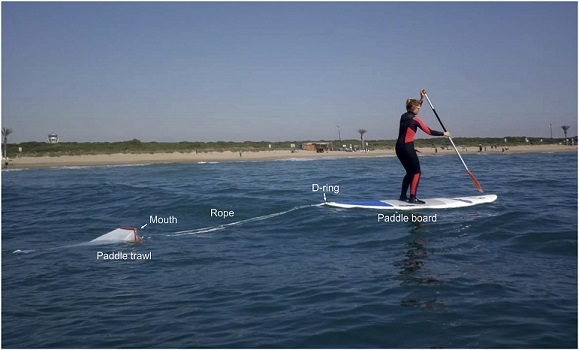 A team of the UB has studied for the first time the presence of microplastics in the coasts of Barcelona, thanks to the participation of the citizens gathering scientific samples. The study, published in the journal Science of Total Environment, is a pioneer citizen science study worldwide, since it analyses a hard-access area for oceanography research ships, due its too shallow depth and chance to run aground, and the danger it involves regarding swimmers.

To sample the unexplored area, researchers Elsa Camins, Miquel Canals, William P. de Haan and Anna Sanchez-Vidal, from the consolidated Research Group on Marine Geosciences of the Faculty of Earth Sciences of the UB, in collaboration of the Spanish delegate of the NGO Surfrider Europe, worked on a net which can be dragged by a paddle surfboard. “This net allows us to get valuable scientific samples from an inaccessible area for other kinds of boats, while we involve citizens in this and raise environmental awareness on plastic pollution”, says Anna Sanchez-Vidal.