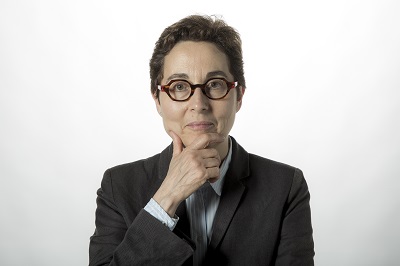 Professor Marta Segarra, from the Department of Modern Languages and Literatures and English Studies of the Faculty of Philology and Communication, received the Best Practices Award on Gender-sensitive Communication 2018, a prize given by the Association for Women Journalists.

Other awardees in the 2019 edition of the Gender-sensitive Communication Awards were the photographer Pilar Aymerich, Sandra Sabatés and María Escario, among others.

A large career in and outsite the university field

Doctor Marta Segarra is a professor of French Literature and Gender Studies at the University of Barcelona and research director in the Laboratoire d’Études de Genre et de Sexualité-LEGS, in the French Centre National de la Recherche Scientifique. She is also a researcher in ADHUC (Research Center for Theory, Gender, Sexuality at the University of Barcelona). Segarra was visiting lecturer at the Université Paris 8 Vincennes, in the International Collège de Philosophie (Paris), Cornell University and at the University of California-Berkeley, among others. Her research is mainly focused on the fields of gender and sexuality, biopolitics and post-humanism, and cultural studies. She has published several books: The world we need (with Donna Haraway; CCCB, 2019), Teoría de los cuerpos agujereados (Melusina, 2014), L’habitació, la casa, el carrer (CCCB, 2014), Escriure el desig. De la Celestina a Maria-Mercè Marçal (Afers, 2013), among others. She writes for the newspaper Ara.

The Women's Summer University, an initiative by the City Council of Cornellà de Llobregat and the University of Barcelona, has been awarded for having brought closer the feminist theory to citizens. This is the first experience of higher training in gender equality in Catalonia, outside the studies aimed at higher education students. The aim of the program is to offer an alternative training on gender equality to update knowledge and exchange information and opinions from a gender perspective, as well as analyzing current issues which are not always treated over the academic course.