The paper entitled Auditory predictions shape the neural responses to stimulus repetition and sensory change, by Cacciaglia, Costa-Faidella, Zarnowiec, Grimm, & Escera has just been published in the journal Neuroimage.

In this functional Magnetic Resonance Imaging (fMRI) study, we used a so-called “roving standard paradigm” to show a) that deviance-related activation in superior temporal gyrus increased as a function of the preceding history of stimulus repetition (larger activation for longer stimulus sequences; Fig. 2)), and b) that activity elicited by repeated stimulus was shaped both by stimulus repetition history and predictive processes accounting for the probability of potentially occurring deviants (Fig. 5). 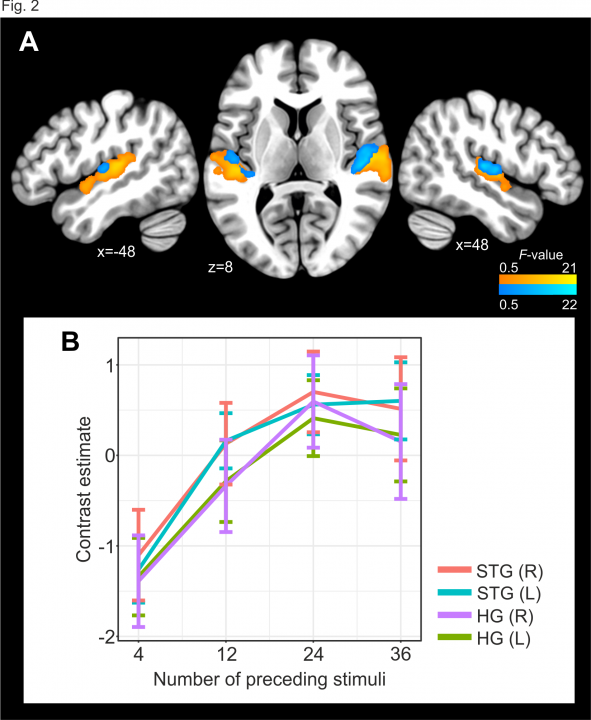 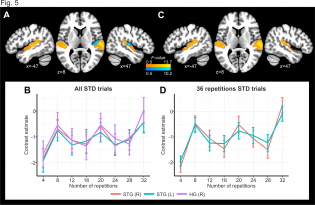 The full abstract reads as follows:

Perception is a highly active process relying on the continuous formulation of predictive inferences using short-term sensory memory templates, which are recursively adjusted based on new input. According to this idea, earlier studies have shown that novel stimuli preceded by a higher number of repetitions yield greater novelty responses, indexed by larger mismatch negativity (MMN). However, it is not clear whether this MMN memory trace effect is driven by more adapted responses to prior stimulation or rather by a heightened processing of the unexpected deviant, and only few studies have so far attempted to characterize the functional neuroanatomy of these effects. Here we implemented a modified version of the auditory frequency oddball paradigm that enables modeling the responses to both repeated standard and deviant stimuli. Fifteen subjects underwent functional magnetic resonance imaging (fMRI) while their attention was diverted from auditory stimulation. We found that deviants with longer stimulus history of standard repetitions yielded a more robust and widespread activation in the bilateral auditory cortex. Standard tones repetition yielded a pattern of response entangling both suppression and enhancement effects depending on the predictability of upcoming stimuli. We also observed that regularity encoding and deviance detection mapped onto spatially segregated cortical subfields. Our data provide a better understanding of the neural representations underlying auditory repetition and deviance detection effects, and further support that perception operates though the principles of Bayesian predictive coding.