The paper entitled Deviance-related responses along the auditory hierarchy: combined FFR, MLR and MMN evidence, by Shiga, Althen, Cornella, Zarnowiec, Yabe, & Escera, has been published in PLoS ONE.

This paper is the outcome of the work carried out during Dr. Shiga’s stay in our lab in 2013-2014 for a total of one year. Essentially, this study demonstrates that it is feasible to record neural correlates of deviance detection along the auditory hierarchy at least at three different levels: brainstem (as measured with the frequency following response -FFR), ealry cortical processing (as indicated by the middle latency response -MLR), and high-level cortical processing as revealed by the mismatch negativity (MMN). This opens the possibility to obtain, at once, a comprehensive view of the integrity of the auditory novelty system on a range of clinical conditions.

The full abstract reads as follows:

The mismatch negativity (MMN) provides a correlate of automatic auditory discrimination in human auditory cortex that is elicited in response to violation of any acoustic regularity. Recently, deviance-related responses were found at much earlier cortical processing stages as reflected by the middle latency response (MLR) of the auditory evoked potential, and even at the level of the auditory brainstem as reflected by the frequency following response (FFR). However, no study has reported deviance-related responses in the FFR, MLR and long latency response (LLR) concurrently in a single recording protocol. Amplitude-modulated (AM) sounds were presented to healthy human participants in a frequency oddball paradigm to investigate deviance-related responses along the auditory hierarchy in the ranges of FFR, MLR and LLR. AM frequency deviants modulated the FFR, the Na and Nb components of the MLR, and the LLR eliciting the MMN. These findings demonstrate that it is possible to elicit deviance-related responses at three different levels (FFR, MLR and LLR) in one single recording protocol, highlight the involvement of the whole auditory hierarchy in deviance detection and have implications for cognitive and clinical auditory neuroscience. Moreover, the present protocol provides a new research tool into clinical neuroscience so that the functional integrity of the auditory novelty system can now be tested as a whole in a range of clinical populations where the MMN was previously shown to be defective. 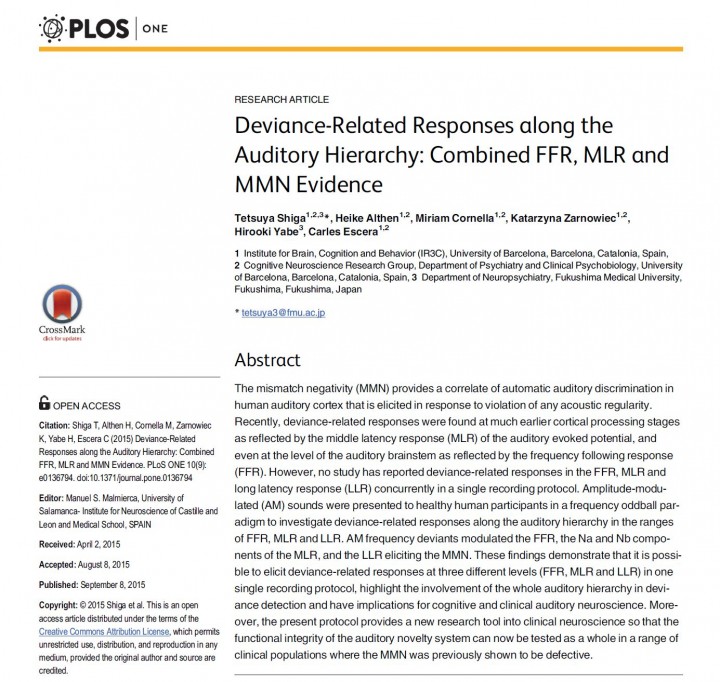