Neurons in the subcortical auditory system replicate the frequency spectrum contained in the sounds we perceive via their phase-locking activity (recorded from the scalp as the Frequency-Following Response or FFR). The FFR sounds as the eliciting stimuli, and it has been used extensively to demonstrate that efficient speech encoding at subcortical stations is linked to better reading abilities, literacy and an improved capacity to synchronize movement to a rhythmic auditory input.

We have recently shown that serotonin transporter-linked polymorphic region (5-HTTLPR), a common functional polymorphism located in the promoter region of the serotonin transporter gene (SLC6A4), is implicated in an efficient speech encoding in the human subcortical auditory pathway. Specifically, individuals with low serotonin transporter expression had higher signal-to-noise ratios and a higher pitch strength representation of speech compared to individuals with medium or high expression (Selinger et al., 2016; Figure 1). Our current challenge is to characterize the functional implications of this genetic advantage by investigating whether such a more efficient speech neuronal encoding is associated in human healthy adults and infants, with better reading abilities and educational achievements. 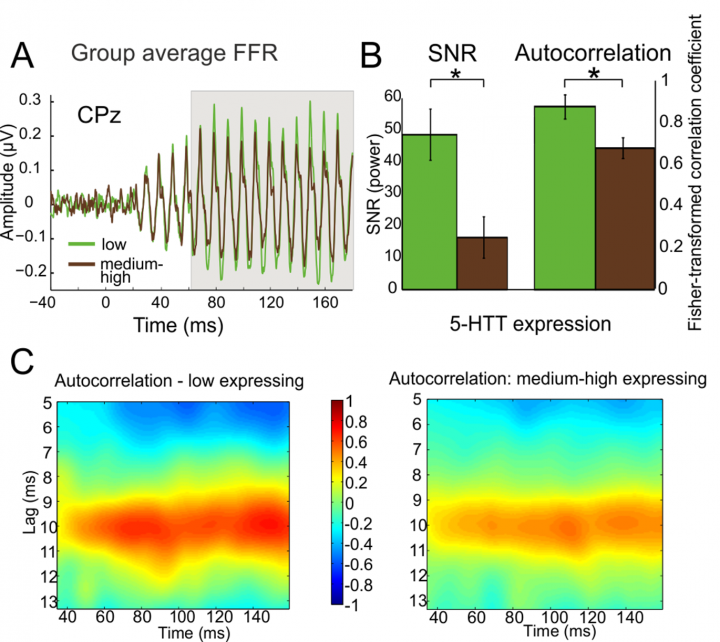 Figure 1. The Frequency-Following Response (FFR) in individuals according to their expression of the serotonin transporter gene (low and medium-high). A) The grand-average FFR. B) Signal-to-noise and pitch strength bar plots. C) The autocorrelegram function in the two groups. Notice that genetic differences can be seen by the naked eye in the recordings (A) and in the autocorrelogram functions (C), and were confirmed statistically. From Selinger et al. (2016).

This research on the neurogenetics of speech encoding has roots back to our former neurocognitive genetic studies, in which we demonstrated modulation of contextual updating of mental representations by COMT and ANKK1 gene-gene interactions (Garcia-Garcia et al., 2011; Figure 2), and this very same genetic epistatis accounted for resetting of gamma neural oscillations to auditory stimulus-driven attention (Garcia-Garcia et al., 2017; Figure 3). 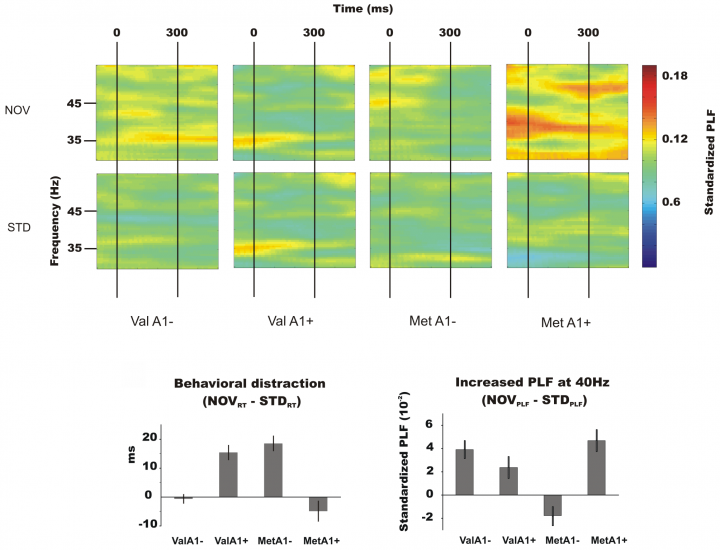