Sistemes Oberts is a new course that offers teachers the opportunity to explore and examine hybridization and convergence between artistic and scientific practices. Two forms of knowledge that cannot be assessed only in terms of success or failure, but must be understood as investigation and research activities of what is unknown to us. 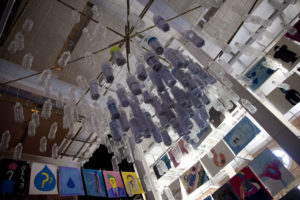 The course is divided into a number of sessions that allow open a space for exploration of these points of connection between artistic creativity and scientific experimentation through discussion and conversation between actors of different areas. The face-to-face sessions at the MACBA (Museum of Contemporary Art of Barcelona) are supplemented with collective works that allow the exploration of the synergy between scientific practices and artistic practices.

During the first edition of Sistemes Oberts, the 2012-2013 academic year, secondary school teachers, along with students, had the opportunity to work closely with artists and scientists, through transdisciplinary perspectives around the water. The scientific-artistics proposals made ??collectively by 600 students from 15 schools, researchers, artists, art historians, curators, designers and educators were presented on May 23, 2013 in Fabra i Coats Factory and have been collected in a video and a publication.

In 2013-2014, the course will be divided into six sessions that will open a space for exploration of these points of connection between artistic creativity and scientific experimentation through discussion and conversation between actors of different areas.

Municipal Institute of Education of Barcelona

In this session, we receive the artist Fito Conesa, responsible of this activity space for creative from 14 to 18 years old people. Here you can find the post by Cloe Massota for this visit [IN CATALAN].

We build an urban garden (I)

Hernani Dias from ReFarmTheCity help us to collectively build a small urban garden by reusing materials such as a washing machine. Cloe explains it. [IN CATALAN].

Welcome to the new edition of the course Sistemes Oberts

The OpenSystems Research Group at the UB and the Museum of Contemporary Art of Barcelona (MACBA) put up the new edition of the project.