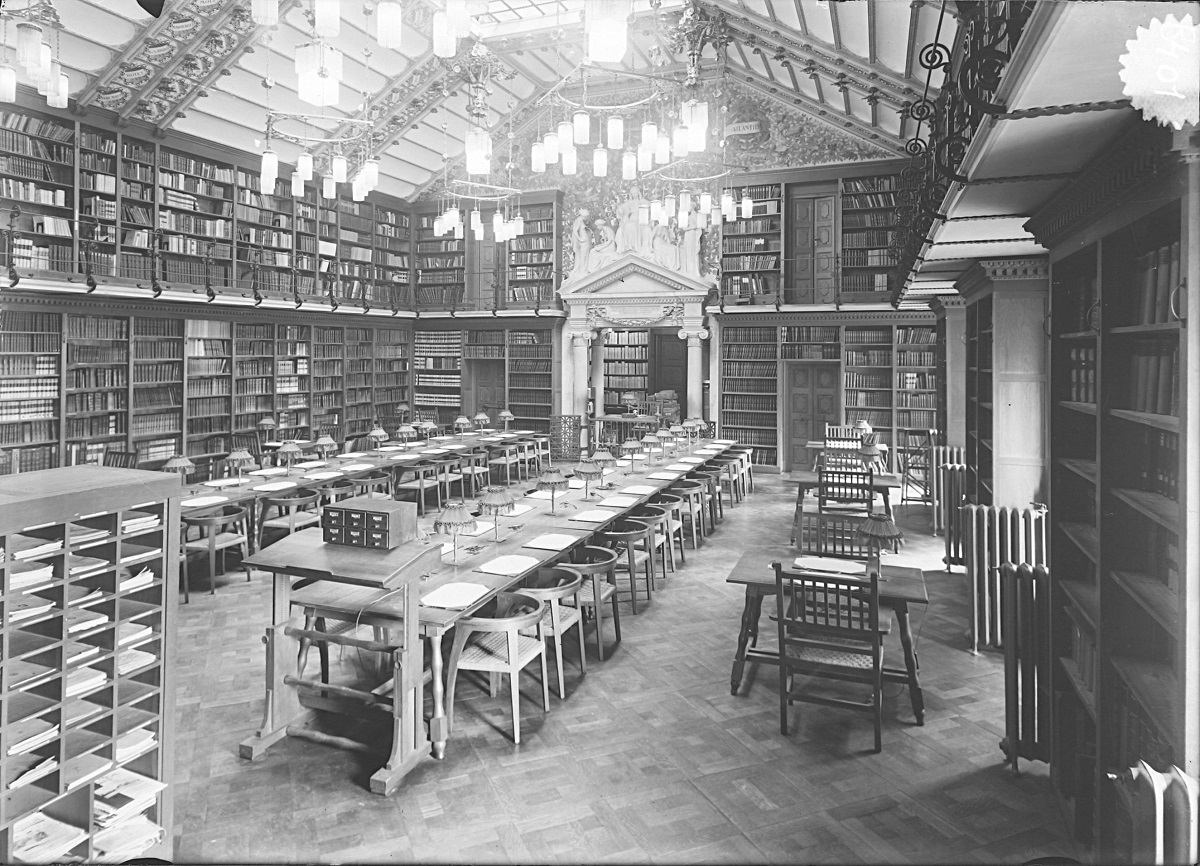 The establishment of the Faculty culminates the long implementation process of the programmes in library science and documentation at all the educational levels of the university.

From its origins to today

The Faculty is an evolution of the School of Librarians founded in 1915 by the Commonwealth of Catalonia. The first objective of that institution under the supervision of Eugeni d'Ors was to train the staff that would be responsible for the Network of Public Libraries of Catalonia, which began its implementation throughout the country in 1918. The most innovative trends in Europe and the United States inspired its creation. From its foundation to the implementation of the pre-EHEA degree in documentation, the course curriculum have established a three-year degree, with specific access requirements in compliance with the university's regulations.

Over its nearly ninety years of history, the School employed a considerable number of distinguished professors who contributed to its prestige among teaching and cultural institutions in Catalonia. Eugeni d'Ors (professor between 1915 and 1920), Jordi Rubió i Balaguer (professor since 1915 and director between 1930 and 1939), Carles Riba, Jaume Massó i Torrents, Lluís Nicolau d'Olwer, Manuel de Montoliu, Pompeu Fabra, Ramon d'Alòs-Moner, Joan Petit, Joaquim Xirau, Pere Bohigas, Eduard Toda, Miquel Coll i Alentorn, Joaquim Molas and many other important individuals in the history of Catalonia were linked to the School.

From an administrative perspective, the School (now Faculty) has been supervised by different public institutions of Catalonia:

In 1981 the course curriculum guidelines course curriculum guidelines for the schools of Library and Information Science of Spain were published. The year after that, the School, which participated in the preparation of the guidelines draft, was awarded the status of university school and was affiliated, for academic issues, to the University of Barcelona. The Spanish Minstery of Education and Science recognized its role and distiguished it with the Necktie of the Civil Order of Alfonso X the Wise (1982). Although library science studies have a long-standing tradition in Catalonia, they were not officially recognized by the Ministery until 1978, when the decree of creation was approved. This was the result of the Catalan librarians effort to achieve official recognition of this profession, for which there was no official training in Spain.

More recently, with the necessary adaptation of university programmes to the Law of university reform, the Universities Council appointed the School to represent the teaching interests of the profession in the working group created to this effect. The new indicative plan of the pre-EHEA diploma stemmed from its proposal.

In June 2003, the National Agency for Quality Assessment and Accreditation (ANECA) awarded university centres offering qualifications in Library and Information Science financial aid to prepare a project to create a bachelor's degree and a course curriculum within the new European Higher Education Area. The project, coordinated by the Faculty of Information and Audiovisual Media of the University of Barcelona and other institutions, was assessed very favourably and has been published as a white paper for the new suggested qualification: Bachelor's degree in Information and Documentation (Madrid: ANECA, 2004).

Also within the actions designed to prepare the University for this European future, in the academic year 2004-2005, the degree in Library and Information Science of the Faculty participated in a Pilot plan by the Catalan Department of Universities, Research and the Information Society for the adaptation of Catalan university qualifications to the European Higher Education Area.

One of the highlights of the academic year 2005-2006 was the celebration of the 90th anniversary of the creation of the School of Librarians, from which our Faculty originated. This celebration gave us the opportunity to boost our social impact, within the UB (in number 36 of the magazine La Universitat), professional environments and the wider society in general, and to strengthen our relationship with former students. The memory of the inauguration of the Jordi Rubió i Balaguer room and the closing ceremony of the academic year held at the Paranymph of the UB crowded with attendees of all ages provide proof of this. The main focus of the celebration include two exhibitions –one on the history of our Faculty ("A retrospective look: from the School of Librarians to the Faculty of Library and Information Science (1915-2005)", commissioned by Assumpció Estivill) and the other one on the first decade of the School's library ("The School's library: its first years (1920-1930)", organized by the Library of the Faculty)–, the inauguration of the Jordi Rubió i Balaguer room on 20 April 2006, which is intended as the Faculty's main hall but also as a space for intellectual reflection, renovation, exchange and dissemination of the issues on which Jordi Rubió made an impact (the world of libraries, the history of books, the study of bibliographic and documentary heritage, the document classifications and languages and information professional training), "Seminars of the Jordi Rubió i Balaguer room"; the BiblioTrobada, organized by students with the screening of a documentary on Faculty life on 19 April 2006; and the end-of-year cerimony at the UB Paranymph on 23 May, which kicked off the closing of the academic year celebrations and farewell to graduates ending their studies. All these and other activities were registered on the website of the anniversary, especially created for the occasion.

The second highlight of the academic year 2005-2006 was the activity addressed to the convergence with EHEA: the implementation of the pilot master's degree in Digital Content and the administrative procedure to turn it into an official master's degree; the continuation of the Catalan Government's pilot test for bachelor's studies adhering to the European model in our current pre-EHEA diploma; our work with other Spanish institutions in our field to defend the scope of our own qualifications in the new university framework; the constant revision of the course curricula of all subjects from the perspective of ECTS (European Credit Transfer System) credits and of the training based on contents and competences.

The academic year 2006-2007 saw the preparations towards the important changes scheduled for the next two academic years, in which the adaptation process to the European Higher Education Area are to take place. These changes have led to major internal efforts within the governing bodies of the Faculty including the establishment of new assessment regulations, the adaptation of the academic calendar to the new continuous assessment philosophy, the signature of an academic and teaching agreement with the Rector's Office, the start of the preparation of a strategic plan for the Faculty and, lastly, the preparation of our Faculty's proposal of new bachelor's and master's degree qualifications within the University of Barcelona.

All of the above took place over an academic year in which the Spanish university system experienced a new legal reform regulating this system along with the debate about the new Decree on official university qualifications (published 29 October 2007) and the new teacher accreditation rules. These changes amount to important alterations of the environment surrounding our strategy for the future as a Faculty. This academic year can be considered an active transition period influenced by the process of strategic internal reflection of the University of Barcelona (2020 Horizon and strategic plans of the faculties), by the waiting periods for the Ministery regulations mentioned above and by the calendar suggested by the Rector's Office for the implementation of the new bachelor's degrees, which are to start in the 2009-2010 academic year.

In the process of organizing the Faculty's archive, which gathers the centre's documents from its foundation in 1915 as School of Librarians, a documentary on the School was found. This documentary was recorded approximately in the academic year 1923-1924. One of the students in the second year class appears to be Martina Pascual, who was in second year at that time. In any case, it cannot have been recorded after that academic year, since Rafael Campalans, who appears in the last sequence, resigned as a lecturer at the end of 1924, with a large proportion of the Industrial University's teaching staff. The documentary is short (it lasts approximately 1:30 minutes) but it is of a high quality, and some of the people that we can see in it are easily identifiable.

The first sequence focuses on the Secretary's Office of the School of Librarians and on it secretary, Petronel·la Tuca. After that, we can see students classifying documents in the library, which was then located in the Clock Building of the Industrial University campus on Urgell street. In the next sequence, we see images of students of the preparatory course that was implemented in the academic year 1919-1920 to train women who wished to access the librarian course. Then we see images of the first year Latin class with professor Lluís Segalà, who was the School director between 1919 and 1930. The last sequence includes images of a class of the subject General Knowledge of the Pure and Applied Sciences and Their Classification, with professor Rafael Campalans.

For preservation and conservation concerns, the film has been diposited in the archive of the Filmoteca de Catalunya, which has provided the Faculty with a DVD copy of the original film.