In this tutorial you will find a set of instructions describing how to perform Dynamic Undocking (DUck) and analyze the results. The procedure will be supported by the example of cationic trypsin (PDB: 2AYW) and a library of fragments lig_lib.mdb, previously docked to the protein with rDock. All the files required for the simulation can be downloaded here.

More information about Dynamic Undocking can be found here: Dynamic undocking and the quasi-bound state as tools for drug discovery

It’s better to perform simulation on a server (however it’s possible to run it locally). The rest of steps (preparation of system) can be performed locally. It can make a difference in your package distribution.

DUck is distributed as a package of scripts available here and also on github. After unpacking, preparation of DUck is pretty straightforward – set the environmental variable to proper directory with duck.svl script:

For MOE2016 and newer versions:

Make sure all scripts are located in $HOME/moefiles/svl directory

The first and essential step is the identification of the key atom in the receptor that forms hydrogen bond with the ligand. DUck will force the rupture of this interaction. The atom of reference must form hydrogen bond with all (or most) known ligands. For well-known systems, like the one used here, it can be identified from a structural superimposition of all the available protein-ligand complexes. On novel binding sides, it may be identified with a hot spot identification method.

In trypsin the key hydrogen bond is formed between oxygen of Asp189 and corresponding nitrogen atom in the ligand. As atom of reference we will use one of the oxygens of carboxyl group of that residue. 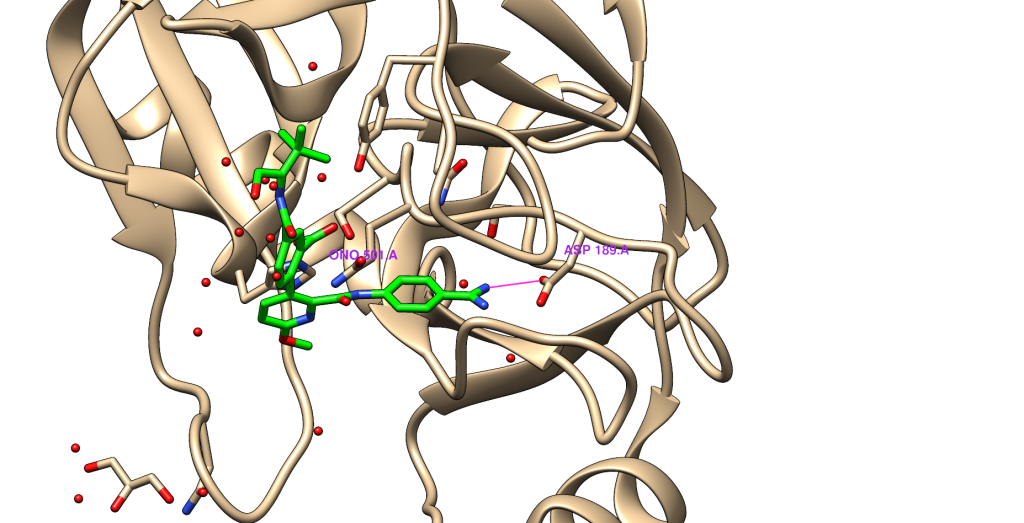 One of the most important steps in system preparation is chunk selection. “Chunk” is a minimal subset of residues that preserve the local environment around the key hydrogen bond. Selection of residues is essential for the accurate result of Dynamic Undocking, thus very careful visual inspection is required. Excess residues will slow down calculation and can potentially block the ligand from leaving the pocket, resulting in very high WQB values that do not reflect the strength of the hydrogen bond. An incomplete structure will result in artificially high solvent exposure, which will render the hydrogen bond more labile and cause to underestimate WQB value. The following steps describe chunk preparation process:

In this example we have used cavity composed of the closest residues to the OD2 atom in Asp189. The structure was divided into separate chains and the ends of the chains were acetylated or N-methylated. Then the structure was protonated and, if needed, clashes were removed. Appropriate structure, prepared using MOE, is provided in the file (trypsin_chunk.pdb). 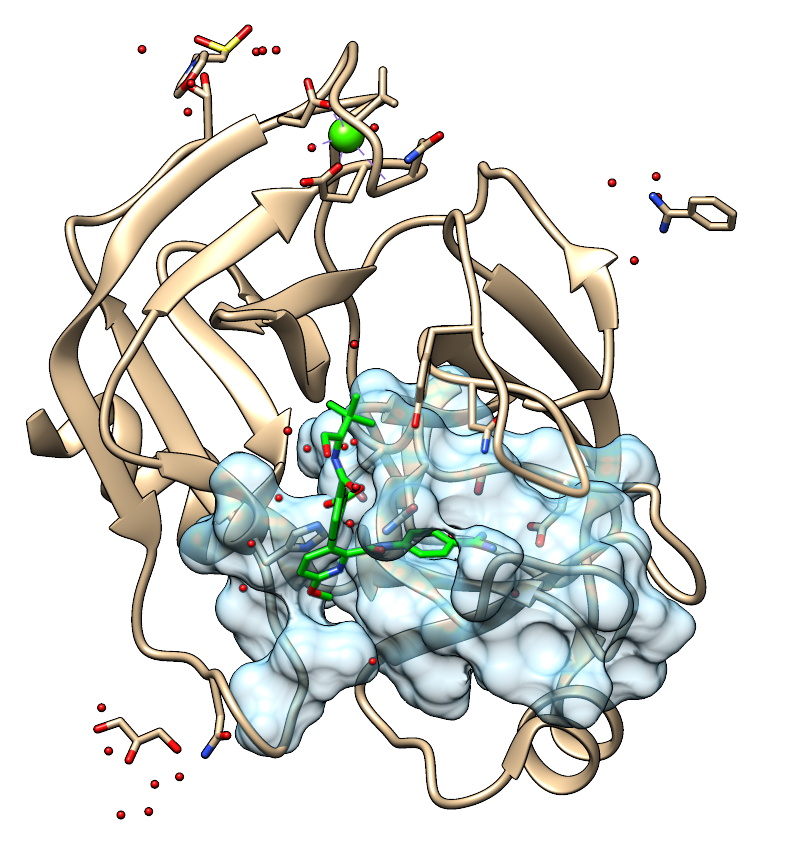 Except for the receptor model, a set of properly oriented ligands is required (docking poses or superimposed X-ray geometries). Library of ligands can be obtained using any docking procedure.

For this example we used the library of 10 ligands, produced by docking in rDock (lig_lib.mdb). The library was inspected by MOE and the structures were protonated (washed) and saved into field called mol (this exact name is required to complete the next step). Additionally, to check if the next step will be processed smoothly, partial charges were assigned using AM1-BCC method. In case of clash, the structure has to be modified. Otherwise the SVL script will crash. Once you have prepared your ligand DB save it in *.mdb format.

The next step of the procedure is done automatically by MOE SVL script, which performs following steps:

The script creates series of files that will perform the Dynamic Undocking, which can be later transfer to server and used to perform steered molecular dynamics. For the protein AMBER force field 99SB is used. Each system is placed in cuboid box spanning at least 12 Å more than the furthest atom in each direction. The box is then filled with TIP3 water molecules to create periodic boundary conditions. When needed, Na+ or Cl– are added to force the neutrality of the whole system.

In our example we loaded the structure of the receptor to MOE and marked the atom of the receptor that makes key interaction. Then the SVL script (duck.svl) was loaded. It opens a window in which you can edit parameters of the DUck simulation: 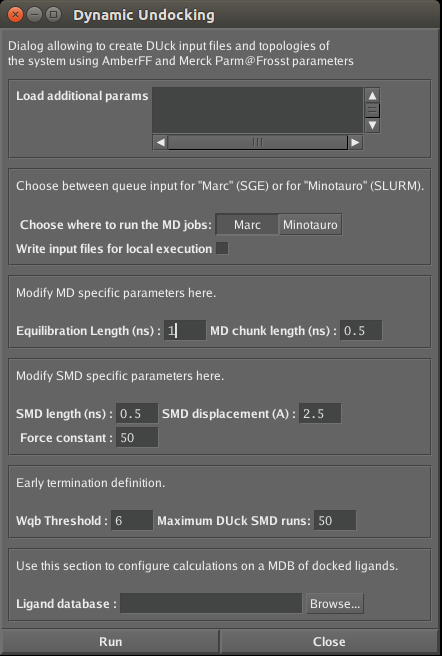 Script creates a series of files, essential for SMD:

The rest of files are collected in LIG_target_* folders, separate for every ligand:

In order to equilibrate the system the following steps are executed:

At this stage, the first SMD simulations can be executed. We run two SMD from the same restart file, but at different temperatures (300 K an 325 K) to ensure that trajectories proceed differently. The SMD lasts 500 ps, during which time the distance between the atoms forming the key hydrogen bond is steered from 2.5 Å to 5.0 Å (constant velocity of 5 Å/ns) with a spring constant of 50 kcal/mol Å2. To generate diverse starting points for SMD trajectories we perform 1 ns of unbiased MD simulation and repeat the process as many times as desired (e.g. 50 ns unbiased MD simulations are needed to execute 100 SMD trajectories).

MD simulation conditions are as follows:

During the first step of the simulation the system will minimize, warm up to 300 K and equilibrate at this temperature for 1 ns. After that SMD at 300 K will be performed only once.

Before performing the next step getWqbValues.R script calculates the WQB value and if WQB is greater than established threshold md1.q will be submitted (analogical procedure as in case of equil.q). md1.q script will perform 1 ns of MD, with constrains on both ligand and receptor, then repeat SMD at 300K and do the same at 325 K twice (so after two initial steps number of simulations for each temperature is the same). Every following simulation will repeat the steps once for each temperature preceded by WQB > threshold condition. The initial state of system for MD simulation is the last of previous simulation in 300 K (during MD in 325 K the system is warming up).

As the results of SMD we get a couple of files with the information about the simulation process and potential errors: equil.q.e, equil.q.o, *.rst, *.out, mdinfo.

Work value can be calculated for all of the trajectories. The main result (WQB) is the lowest value of work calculated from all of trajectories, printed in file wqb_final.txt.

wqb_plot.png – plot generated at the and of DUck simulation, presenting WQB in the function of distance.

A few examples of potential outcomes are presented below. The left (a) shows results for strongly binding ligand. The middle plot (b) shows different outcomes of simulation for a single ligand. Different WQB values are results of different starting states and different trajectories.  In the last case (c) ligand is not binding to the chunk and no work is needed to pull it out of the pocket.

In case plots want to be generated manually run command:

Detailed data for SMD is collected in DUCK_*/ and DUCK_325K_*/ folders, divided by temperature and step of simulation. The folders contain files with trajectories. File duck.dat contains four columns: position of the end of string, position of the reference atom in the ligand, force applied to the string to equilibrate pulling of the ligand, work calculated from the force.

If you are having trouble regarding usage of DUck you can ask for support: