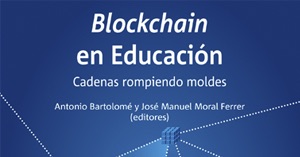 Possibly this is the first book, published in Spanish, about the applications of BC technology in Education. It is such a recent issue and at the same time so hot that we are still not sure where it will take us. The editors of this book are convinced that BC is a technology that will revolutionize the registration of events in databases, a disruptive change at the level of what the Internet or the Web meant.

This change will affect multiple fields and, among others, also the educational one.

It is not the central theme of Education, it is not the basic objective of educational research, and it is not going to represent a change in the way we teach and learn as important as the implantation of the public school could have been in the 19th century, but It will solve some problems, it will offer ways of development to long-anchored ideas and it will allow us to understand the future in another way.

It may also be that it generates changes in the most relevant actors in the education system. In the long term, it can contribute to democratization or liberalization, but it can also contribute to putting the system in the hands of companies focused on immediate profit. You can not predict a black future or a pink one. But something is going to change.

The volume has been promoted by Antonio Bartolomé and José Manuel Moral Ferrer, members of the research group Learning, Media & Social Interactions and published within the Transmedia XXI collection.

IRE is a member of