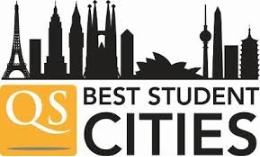 Barcelona is considered the 23rd best city in the world to study at university, according to the 2017 edition of the QS Best Student Cities ranking, published by Quacquarelli Symonds (QS), specialized in listing universities worldwide.

Montreal holds the first position this year, followed by Paris, which had led the list over the last four years and now holds the second position. English and German cities have upgraded as well in this ranking, and Madrid (31) and Valencia (70) are other Spanish cities included in this list.

Cities to enter the QS Best Student Cities annually have to have more than 250.000 inhabitants and two universities appearing on the last QS World University Ranking. This year’s edition includes two new elements: on the one hand, the list got longer up to 100 cities (75 so far) and, on the other hand, students and recent graduates from all the world can rate their experiences and give their opinion on the categories of the ranking, such as the reputation of the universities, costs and quality of life in the city, student fees, of the mix of local and international students.

The ranking shows good news for cities in the United Kingdom, despite the impact of Brexit, with London stepping up to the third position of  the list (two more than last year), Edinburgh in the 18th position and Manchester sharing position with Barcelona (23), as a consequence of the pound’s fall, which makes these places more affordable. German cities have also improved positions; Berlin holds the sixth position and Munich the ninth. Regarding Asia, Seoul improves six positions and holds the fourth now.

Barcelona outstands for having one of the most attractive atmospheres in Europe to live and study, thanks to its weather, international atmosphere, gastronomy and its artistic and cultural legacy, but also for having two of the most prestigious universities in Spain: the University of Barcelona and the Universitat Autònoma de Barcelona, both ranked in the global top 210 of the QS University Rankings 2016-17, holding the 160th and 203rd positions, respectively. Barcelona gets the highest score in affordability, which is understandable if compared to London or Paris, for example. Student fees, although being higher than those in France and Germany, are still low according to the list. The city also scores well for being one of the most interesting cities in Europe and one of the most attractive destinations for international students.