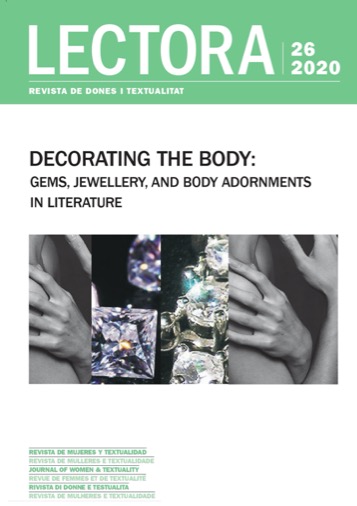 Issue 26 of Lectora: revista de dones i textualitat has just been published. This volume includes a Dossier, entitled "Decorating the Body: Gems, Jewellery, and Body Adornments in Literature" and coordinated by Anne-Marie Evans (York St John University, United Kingdom), that explores the representation of jewellery and gem culture in literature from the perspective of gender studies and the criticism of culture stemming from them, paying close attention to the historical evolution of said representation and how the latter has been translated into contemporary texts. The five articles published within this section focus on Terenci Moix's "esperpento" literature, Carol Ann Duffy's representation of adornments as a critique of canonical love poetry, the use of jewels by Greek women as secret weapons in the art of seduction, the centrality of clothing in Benito Pérez-Galdós oeuvre, and the jewels made up with human hair characteristic of the Victorian Era. The Varia section includes works on the transgender artist Effy Beth, the intersectional violence that operates on racialized gendered bodies, in particular in relation to Toni Morrison and Louise Erdrich, or the use of humor to contest binary patterns, among many others. The journal also includes its usual sections on Reviews and Artistic Creations, with an autobiographical text by Isabel Franc and a conversation with Jay Bernard and Afshan D'souza Loudi, two emerging poets from the United Kingdom.