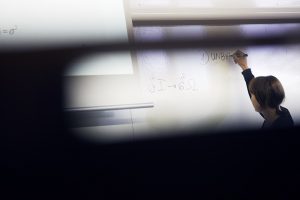 Three projects that aim to contribute to the green and digital transition, led by Montserrat Guillén, David Moriña, Jordi Teixidó, and Elisabet Viladecans, have been awarded funding from the Ministry of Science and Innovation of the Spanish Government.

The project titled “Insurance data analytics: methods and implications for usage-based products”, led by Co-PIs Montserrat Guillén and David Moriña, focuses on the insurance sector which represents more than 5 of  % Gross Domestic Product (GDP) in Spain, and is undergoing a deep transformation by the use of sensors and big data for prevention. This project will contribute significantly to providing new methodological procedures in the area of insurance data analytics and will have a deep impact on science by creating a new fundamental ground for the statistical analysis of risk.

Our researcher Jordi Teixidó leads the project “Carbon Pricing in transportation: a Climate policy evaluation”. The main goal of the study is to analyse the scope of climate policies in transportation. Transportation is the only sector that has not reduced its CO2 emissions since 1990, therefore the project aims to focus its efforts on evaluating the different existing policies seeking to decarbonize it. Among these policies, the “carbon pricing” policy, which consists in taxing each ton of CO2 emitted by the different means of transport, stands out due to its controversy and potential unequal distributive impact. A subsequent line of research will investigate the role that the train should play in the ecological transition.

Elisabet Viladecans develops her research work together with other UB School of Economics researchers Jordi Jofre, Matteo Gamalerio, Rosa Sanchis, and Albert Solé, PhD in Economics alumnus Pierre Magontier, and Filippo Tassinari, and PhD in Economics students Daniel Favre, Mariana Magagnoli, and Ghizlen Ouasbaa. Their project -led by Viladecans-, titled “Cities at the forefront of climate change: Evidence-based policy and political backlash”, aims to contribute to a better understanding of the role of cities in the fight against climate change and the ecological transition process.