THE LIVED LANDSCAPE: Topography of objects

In this line of research, we will identify, catalogue, view and situate objects in the interior spaces of a monastery. To do so, we will start with the inventories of the sacristy and convent of the Clarissan monastery of Sant Antoni and Santa Clara in Barcelona, which we will analyse in a case study. The ultimate goal is to offer a product on this platform consisting in a digital topography of the location of the objects inside a monastery to reveal the research potential of their analysis.

One of the driving themes in some recent studies focusing on the cultural horizon of mediaeval monastic communities is the “discovery” of an interior topography of monastic spaces in which the objects and practices together take on a corporeality of which we were unaware until now. Starting with this idea, this line of research aims to compile the possible interpretations provided by approaches based on studying the materiality of objects, not only in themselves but also within their narrative and textual constructions, which enable us to shift the analysis from the object to its setting. We particularly want to focus on the specific case of Sant Antoni and Santa Clara monastery in Barcelona, where extraordinarily rich document sources have been conserved which provide us with information on the objects existing inside the building over the course of three centuries: from the 14th to 16th. The prime goal will be to create a database that compiles the relevant information from the inventories of the sacristy and the convent from this monastery’s archive, while comparing them with other sources from the same archive (invoices, account books, etc.) and with the objects themselves, for those that have been conserved. The presence of the objects in the inventories, the description of them in relative detail and the reference to the place where they were kept, their purpose and the space where they were used should enable us to not only evoke parallels but also, and more importantly, to rethink each of these objects based on their living materiality, to re-create the gesture that ritualised them and to interpret them as devotional or everyday objects narrated in the moment that they reached the hands of the sacristans and abbesses who left documentary proof of them or, more generally, the hands of the nuns from this Clarissan community who used them in their everyday lives over the centuries. 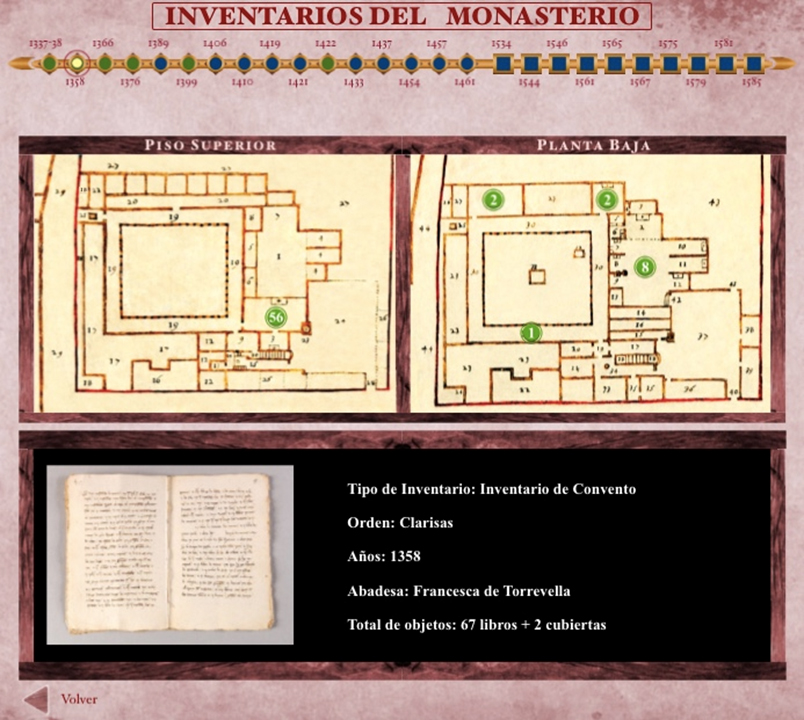 In the Spiritual Landscapes project, we conducted a pilot test of this study solely using the manuscripts that appear in the inventories and providing an infographic on the spaces where they were kept and used: http://www.ub.edu/proyectopaisajes/index.php/ca/eixos/monestir-interior . We now aim to expand this study to all the objects by collecting the countless textiles (liturgical vestments, altar items, etc.) and other liturgical items (goldwork, altarpieces, etc.) mentioned in the inventories and stored in the sacristy, the choir or the everyday spaces, as well as other household objects also mentioned in the convent inventories located in different parts of the monastery.

Our ultimate goal is to provide all this information compiled into an open-access database meant for scholars or the public at large.