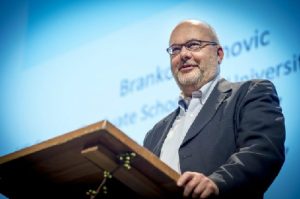 The Faculty of Economics and Business and the Institutions and Political Economy Research Group (IPERG) at the University of Barcelona will host a book discussion on “Capitalism, Alone”, by Prof. Branko Milanovic. His new book is a provocative account of capitalism’s rise to global dominance, which combines analysis of globalisation and inequality to examine what the future may hold. The author is Visiting Presidential Professor and Core Faculty at the Stone Center on Socio-Economic Inequality at the Graduate Center at City University of New York (CUNY). He was formerly Lead Economist in the World Bank’s research department.

In “Capitalism, Alone”, the author explains the reasons why the globe is dominated by one economic system. Capitalism now rules in all but a few marginal areas, after an historical shift since the days of feudalism and, later, communism. Branko Milanovic also explains the varieties of capitalism that now compete for supremacy, and the prospects for a fairer world now that capitalism is the main system.

The leading economist argues that capitalism has triumphed in part because it works, as it delivers prosperity and reflects a human desire for autonomy. However, its dynamics encourage society to treat material success as the ultimate value and sits uneasily with political power. The old system of liberal capitalism is creaking under the strains of inequality and capitalist excess in the West. This model now competes against authoritarian capitalism, exemplified by China, which many claim is more economically efficient, but which is vulnerable to corruption and political unrest.

Neither system yet works for the global south, a problem that Milanovic thinks only a creative programme of mass immigration can address. Looking to the future, he dismisses prophets who think any outcome is inevitable, from worldwide prosperity to robot-fuelled mass unemployment. Finally, Milanovic argues that Capitalism is a risky system, but it is a human system and our choices will determine how well it serves society.

The event will begin with opening remarks by Ramon Alemany, Dean of the Faculty of Economics and Business. Marta Curto, Director General of Economic Analysis of the Catalan Government, will introduce the author, who will then present the book. Finally, Germà Bel, research fellow at the Institutions and Political Economy Research Group (IPERG), will open a discussion and debate.