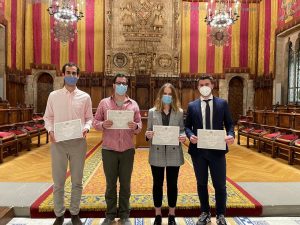 Five UB School of Economics PhD students have been awarded a research mobility grant by the Barcelona Economic Society of Friends of the Country (SEBAP).

The recipients are Juan Ducal, Carles Mañó, Marianna Sebő, Filippo Tassinari, and George Tsiachtsiras. The grant provides 4.200 euros in funding for a visiting period at a foreign institution. In this case, the students have chosen the University of- Toronto, the University in Montreal, the Vrije Universiteit (VU) Amsterdam and the Tinbergen Institute, and the University of Utrecht. The award ceremony took place at the Saló de Cent of the Barcelona City Hall on March 23rd, 2021.

Juan Ducal: Juan Ducal has been accepted to the Department of Economics at the University of Toronto, under the supervision of Prof. Diego Restuccia, expert in macroeconomics and misallocation. From September to December 2021, his research stay will allow him to develop the technical aspect of his research, that combines microdata on innovation performed by firms and macroeconomic quantitative models. His research aims to identify the misallocation of intangibles, potentially casting some light in the industrial policy that tries to promote growth through innovation.

Carles Mañó: Carles Mañó will join the Department of Economics at McGill University in Montreal (Canada) with Professor Hassan Benchekroun. From September to December 2021, he will be doing research on topics of strategic interactions between asymmetric agents, analysing the effect on climate change of different players exploiting different natural resources with its corresponding implication on pollution.

Marianna Sebő: Marianna Sebő has been accepted to the Vrije Universiteit (VU) Amsterdam under the supervision of Raymond Gradus, professor of Public Economics and Administration. The objective of her research lies in analyzing political economy at the municipal level. Specifically, the focus is set on municipalities that reject mainstream political parties in elections, turning to local independent or right-wing and populist parties. For the research project, Dutch administrative microdata is going to be used.

Filippo Tassinari: Filippo Tassinari investigates the role played by cities in shaping the organisation of economic activity. He does so by analysing the fundamental trade-off of urban economics through the lenses of transport economics. From September to December 2021, he will be visiting the Vrije Universiteit (VU) Amsterdam and the Tinbergen Institute, hosted by Professor Jos van Ommeren. By working closely with top researchers in his field of interest, Filippo will be able to improve his current research aimed at analysing innovative urban mobility policies implemented to deal with urban costs such as pollution and traffic congestion.

George Tsiachtsiras: Georgios Tsiachtsiras has been accepted to the University of Utrecht Department of Human Geography and Planning to conduct research under the supervision of Prof. Sergio Petralia. The purpose of his research stay is to explore why innovation remains concentrated in certain areas within countries, mostly large and dynamic cities and metropolitan areas, despite the continuous spread of ICT technologies while leaving other places behind.  During his research stay he will work on the final chapter of his PhD dissertation.