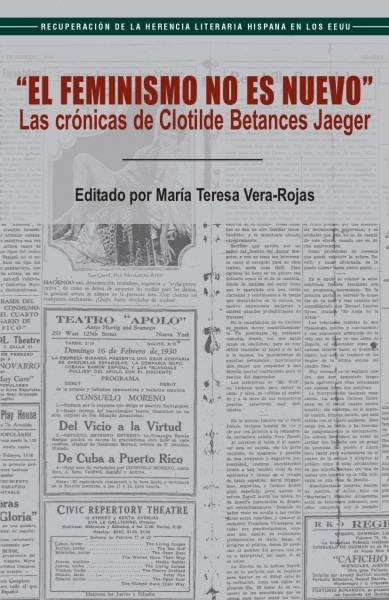 “Every woman who gets accustomed to the yoke of marriage remains a slave,” Clotilde Betances Jaeger wrote in an article published in 1929. This revolutionary idea, which scandalized society at the time of its publication, reflects her passionate ideas in this collection of essays and articles that shines a light on the women’s movement in the first half of the twentieth century in New York’s Latino community.

Clotilde Betances Jaeger was a Puerto Rican feminist, writer and intellectual who, in addition to championing women’s rights, advocated for racial equality, education rights and Puerto Rican independence. She questioned the role of the church, reflected on marriage and highlighted women’s roles in education, the economy and politics. Her writing was a call to arms, encouraging women to fight for their emancipation: “Woman, mother, wife, daughter, alone you have no impact. But join the other women that suffer the same trials and you will see how your efforts multiply, you will see how you crush your enemies.”

Edited by scholar María Teresa Vera-Rojas, this volume contains Betances Jaeger’s pieces that appeared between 1920 and 1940 in Spanish-language publications in New York, including Gráfico, Artes y Letras and La Prensa. It also includes some articles printed in Puerto Rico and the Spanish anarchist press. This is a fundamental text that brings to light the historic role of Latinas in the fight for equal rights, and Betances Jaeger’s writing remains as important today as when first published.