Egyptian vulture migration to Africa: a way full of dangers 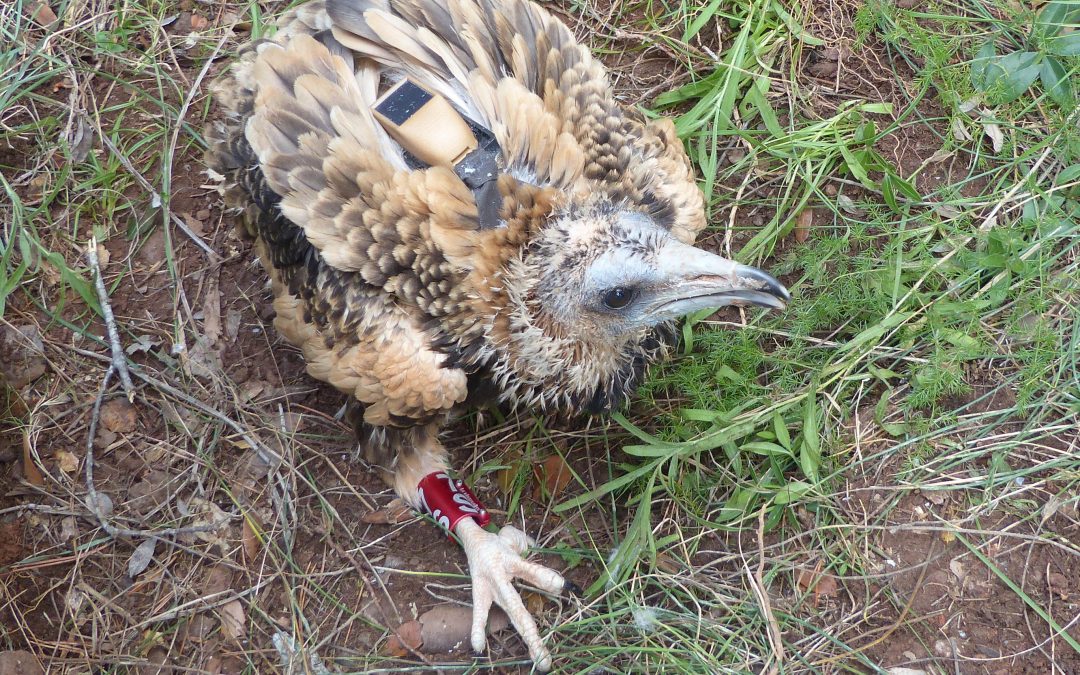 Within the framework of the project “Application of new technologies to know the effects of global and local change in the Iberian populations of Egyptian vulture. Applications for conservation” (see related news) 6 Egyptian vultures were equipped with GPS-GSM transmitters during the 2018 breeding season. Three of them were born in 2018, of which two came from a territory located in the Sant Llorenç del Munt i l’Obac Natural Park (Ros and Obac) and one from a territory in the Guilleries-Savassona Natural Area (Avenc). The other three individuals were older but non-territorials: Orís, born in 2017 and treated in a wildlife rehabilitation centre (see related news), Picatxo, born in 2016 in the Garrotxa county, and Asticot, born in 2014 in Southern France; all of them were captured and released in the Osona county. The mentioned project was supported by Red Eléctrica de España SAU, Fundació Catalunya La Pedrera and Diputació de Barcelona and is led by the Conservation Biology Group of the University of Barcelona (CBG-UB).

Thanks to the GPS-GSM technology it is possible to track with high accuracy the movements and spatial use by these individuals, including their migration to Africa. The Egyptian vulture is a migrating species found in our country roughly from March to September, and it remains in Africa the rest of the year. The available information suggests that most individuals begin their migration between August and September, although there is not much information on the phenology of these movements and the way the migration occurs (e.g. either stopping for feeding or non-stop migration). Besides, not much is known about mortality rates during migration and differences on these rates depending on the age of individuals. In this sense, our project would allow to obtain a valuable information to enhance conservation strategies for this endangered species.

However, the final destiny of our protagonists has been very different. Orís was released in a landfill to ease contact with other individuals (see related news) and feeding. Indeed, it was so adapted to that environment that we could say that it lives in a landfill. This individual was admitted in a wildlife rehabilitation centre soon after leaving the nest and it remained there until it was released last spring, so then migration was not possible. This might have caused that it had lose its migration instinct and, up to date, it has not shown any sign of wishing to migrate.

Picatxo and Asticot have been more active according to their movements, as it was expected considering they were non-breeders. During July and August, they have moved in a wide area, mostly in Catalonia, visiting feeding areas as supplementary feeding points, landfills and areas with extensive livestock areas. Both have been in a feeding area during some days before starting migration, which has been very fast. Picatxo, crossed Gibraltar strait on the 16th August, while Asticot did on the 3rd September and they arrived at Southern Mauritania in few days. We have not received locations from the first one for some days, possibly because it is in an area with no GSM coverage, while we receive regular locations from the second one since it is in an area with fine coverage.

On the other hand, nestlings migration started later as expected. Avenc, once left the nest, remained some weeks in the landfill area, probably with its parents. Its migration began on the 7th September and, after stopping in Catalonia and Aragon for few days, crossed Gibraltar on the 18th September. Nowadays it is also at Southern Mauritania. Unfortunately, both young ones coming from the Sant Llorenç del Munt I l’Obac Natural Park suffered a sad end. Obac, started migrating on late August and in just two days it arrived at the Albacete province, where it suffered an electrocution accident with a distribution power line. Luckily, it survived and was captured on the 20th September by the Castilla – La Mancha rural rangers and taken to a wildlife rehabilitation centre; we still do not know if it will recover from the injuries suffered. About Ros, it started migrating on early September and in few days, it arrived at Southern Spain where it remained for five days. Unfortunately, it was shot on the 10th while it was flying in the Granada province. The rural rangers from the Junta de Andalucía took it to the Centro de Análisis y Diagnóstico de la Fauna Silvestre – CAD, where the necropsy confirmed that the shots was the most likely cause of the death of this Egyptian vulture. Collaboration with other researchers, naturalists (such as Rafa Torralba) and rural rangers have been essential to find these two individuals. 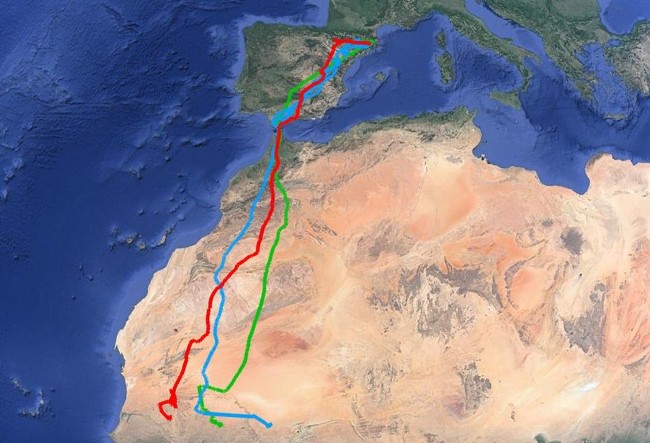 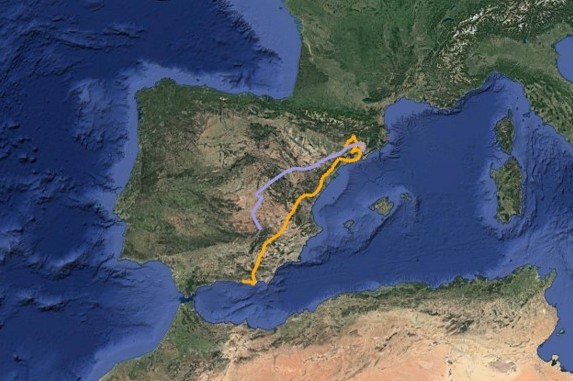 The fitting of the transmitters was carried out thanks to the collaboration between different public bodies and naturalists. The CBG-UB monitored the Catalan population of Egyptian vulture, ringed and measured the nestlings, and took biological samples from them. The Grup de Suport de Muntanya from Cos d’Agents Rurals (Catalan Wildlife Rangers, Generalitat de Catalunya) climbed to the nests and captured the chicks. Víctor García Matarranz from the Ministry for the Ecological Transition captured the Egyptian vultures and fitted them with the emitters. Technicians from Parc Natural de Montserrat, Parc Natural de Sant Llorenç del Munt i l’Obac, Parc Natural de la Zona Volcànica de la Garrotxa, Espai Natural Guilleries-Savassona and Consorci dels Espais Naturals del Ripollès also helped in this project, while rangers from these protected areas also helped monitoring the breeding Catalan population of this species.

Preliminary results are highly interesting, since just in few days we obtained a great amount of information on feeding areas, phenology, movements and mortality causes. As in other raptors, mortality due to the human activity is a serious conservation problem for the Egyptian vulture. However, despite it is known that poisoning is one of the major threats to this species, our information suggest that other kind of persecution and electrocution may also cause be a great threat for the population viability of the Egyptian vulture. Thus, despite this information is worrying, it is also very helpful to adequately address the conservation challenges for this endangered species.